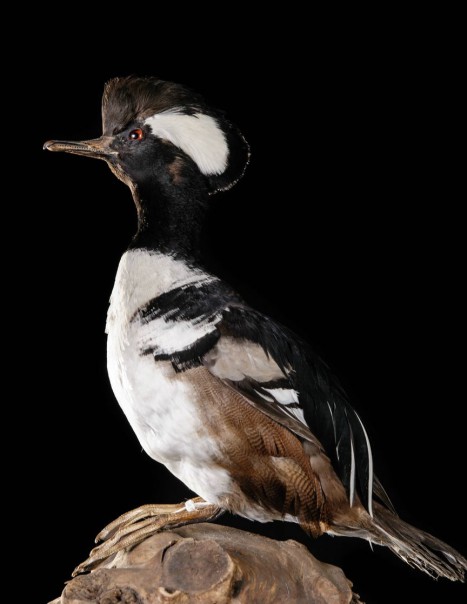 Hooded Merganser is the smallest North American mergansers, approximately the size of a wood duck.
The male has a plumage that has an amazing combination of black, white and reddish-bown. Head, neck and mantle are black and the rump is gray. The tail is dark gray-brown. Throat, chest and belly are white. Two black uneven bars mark the sides of the chest. The flanks are tawny or reddish-brown. In the male, the most outstanding physical character is formed by the ridge that, when deployed, reveals a great variety white edged with black. The crest of the female is brown with a hint of cinnamon and sometimes white at the tip. Chixks have a similar ridge, but smaller. All young males are not necessarily provided with a crest and their song is rather silent.
Hooded Mergansers are the only living exclusively in North America. Formerly, they were present throughout the continent, including in mountain areas to the extent of suitable habitat that could be found. Nowadays, it is mainly present in the Great Lakes region in eastern Canada, but also bordering the Pacific in the states of Washington, Oregon and British Columbia.
Hooded merganser preferences in terms of habitat are quite similar to those of the wood duck. It loves the calm, shallow waters, clear water with a sandy bottom tanks or pebbles. It prefers ponds close to deciduous forests: river valleys, small ponds forests retained mills, swamps or beaver ponds. However, unlike carolins, Hooded Merganser experiencing great difficulty in finding food in the turbulent waters, and also calm waters. The hooded merganser also neglects the large lakes. It migrates in late autumn and moves alone, in pairs or in small bands over short or intermediate distances. Species living in temperate climate zones, are sedentary in general. Some birds arrive on the breeding grounds as couples already paired, other participates tp love rituals.The arrival of migrants depends on the region and latitude, in general it is an early migrant and many individuals reach their destination as soon as the ice melts. The female merganser is quite a homebody and returns in general in the same breeding area than in previous years.

Nesting begins shortly after the arrival of the birds. It is monogamous and sexually mature at the end of 2 years. Usually silent, it emits quite similar vocalizations as frog’s calls.

The hooded mergansers nest in tree holes between 3 and 6 meters above the ground, in hollow stumps, natural cavities or even nest boxes. It is the female who makes the choice of location generally located a short distance from a water source.

The average size of each laying is 10 eggs, but in fact it can vary from 5 to 13. It is linked to the age of the female and the laying period. During this period, if the female is disturbed while it has not completed its laying operation, it abandons the nest. The incubation period lasts 32 to 33 days. Once the female begins to incubate, the male leaves the site and is absent for the remainder of the breeding season.

When they hatch, the young are covered with down. They remain in the nest 24 hours and then are able to move and feed themselves. After 70 days, the young are able to fly, the female then leaves them to prepare for migration. Females nest once a season.