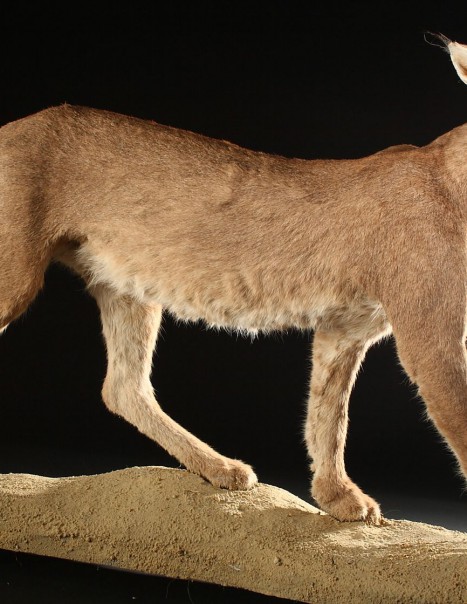 The  caracal is also known as the desert lynx. It’s a mammal of the cat family.

It is found mainly in Africa and Asia.

Caracal measure on average between 55 and 75 cm, with a tail of 25 cm, a height at withers of between 60 and 91 cm. It weighs between 6 and 16 kg, making it the fastest animal for its size. Its most characteristic feature is its large black ears topped with hair brushes. Besides “Karaçal” means “black ears” in Turkish.

The caracal is a great fighter. Its preys are small mammals, rodents or fawns. It is a nocturnal animal, but its hunting technique differs little from that of a domestic cat. Indeed, caracal awaits its prey flattened against the ground. It then approaches crawling silently until the attack which it then melts on its prey with extreme rapidity.

The caracal is mostly a solitary animal, but sometimes it lives as a couple or in a family group. But it remains extremely territorial. It marks its territory by urinating on various objects such as trees or stones.

Mating usually occurs in April. The female may have 1 to 4 babies, after a gestation of 70 to 78 days. They are weaned after 4 to 6 months, although they venture out of their nest as early as three weeks. However, they reach sexual maturity after two years.

Desert lynx, as the name suggests, prefers dry, arid but with woody vegetation. The caracal is an excellent climber.

Although the caracal is classified as least concern in 1996, it is still considered a species in danger of extinction.