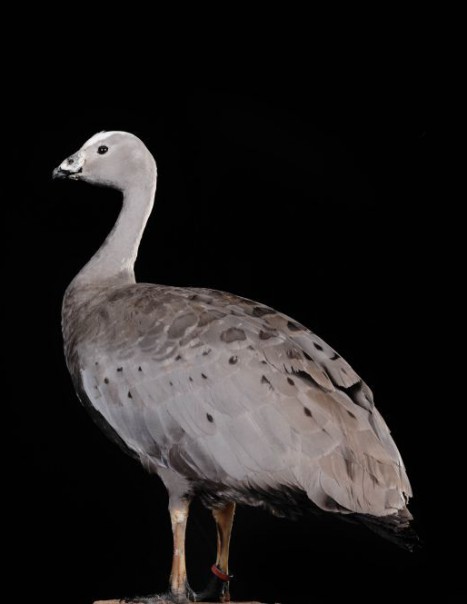 This species had almost disappeared in the 50s. This primitive goose is a symbol for Australia.

The adult is a large goose with pale gray plumage. Several rows of dark spots through scapulars and wing coverts. Flight feathers have broad black tips forming an edge prominently headlong flight. The tail feathers are black. On the pale gray head, the cap is white in the center.
The beak is black, largely covered with a greenish yellow wax. The eyes are reddish-brown, surrounded by a narrow black eye ring. The legs are reddish but webbed feet are blackish. Both adults are similar and chicks are covered in black with white stripes on top and light gray underneath.

Noisy when it feels threatened and during courtship, it is found on small islands off the coast. It breeds in grassy areas, tufts of grass and low bushes. Outside the breeding season, it reaches the beaches and coastal pastures on the shores of freshwater lakes and brackish lagoons of Australia and Tasmania.
After breeding they disperse while others remain on the breeding grounds. The cape barren is vegetarian and eats only plant materials such as leaves, stems and seeds, barley grass, clover and vegetables.
It grazes on the ground where it feeds in general. It rarely goes into the water and swims little, except to protect its brood. It can drink salt or brackish water.

It breeds in colonies but the nests are well spaced from each other. The nest site is vigorously defended by the owners against other geese and intruders such as foxes, dogs. This goose is monogamous and pair bonds last a lifetime. The male is active during nesting.

Breeding season occurs during the winter and begins in May or June. The male builds the nest on the ground and lines it with fluff. The territory is established in the fall and defended by the couple. The female lays 3 to 6 eggs, which are incubated for 34 to 37 days by both parents. The male feeds her during this period. Chicks are feathered after 70 to 76 days after birth. Youngs gather in small groups and earn nearby islands or even continent.

To date the species is protected.