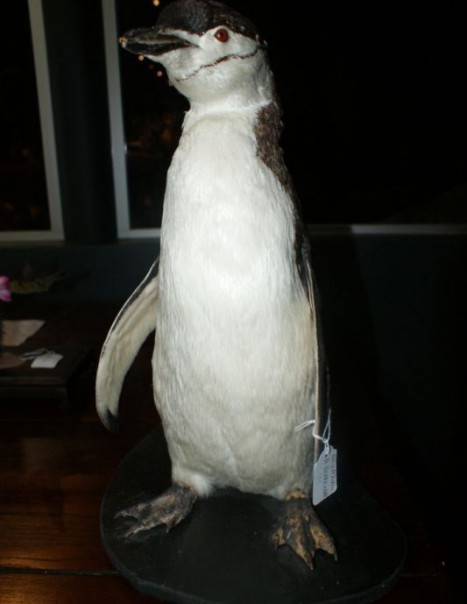 The chinstrap penguin is a species of penguin which is also known as ringed penguin, bearded penguin or stonecracker penguin. Their name derives from the narrow black band under their heads which makes it appears as if they are wearing black helmets, making them one of the most easily identified types of penguin.

They live mainly in Antarctica and on the Shetland Islands, Georgia and various archipelagos and islands of the far north. During winter they congregate on large icebergs of the sub-Antarctic region and the Antarctic Peninsula.

The chinstrap penguin have a black-and-white plumage. The adult chinstraps’ flippers are black with a white edge; the inner sides of the flippers are white. The face is white extending behind the eyes, which are reddish-brown; the chin and throat are white as well, while the short beak is black. The strong legs and the webbed feet are pink.

Like all penguins, they feed at sea and fish mostly krill and a few small fish. They can dive more than 180 meters underwater and stay there twenty minutes without breathing. They make leaps out of the water up to 2 meters high.

These animals are aggressive and noisy and do not get along very well with the Adélie penguin, which they share habitat because they usually take their nests, they are adventurous and like to fight.

Their nest is a circle of stones and pebbles. In April, nesting period, several thousand individuals form colonies and Laying includes two eggs, once the eggs laid, the female will feed into the sea while the male guards the eggs. Parents alternate then over periods of 5 to 10 days, during this period, they keep the eggs out of the ground contact, and do not feed. When they do not keep the egg, they remain at sea for food. When babies are born, they have a gray down. They remain in the nest for 20 to 30 days and then join a nursery, where a small gathering in the custody of one or two adults, who are not necessarily their parents. When they have 2 months, they molt and acquire their adult plumage when they fall into the water and must feed themselves. Their life expectancy is around 15 to 23 years.