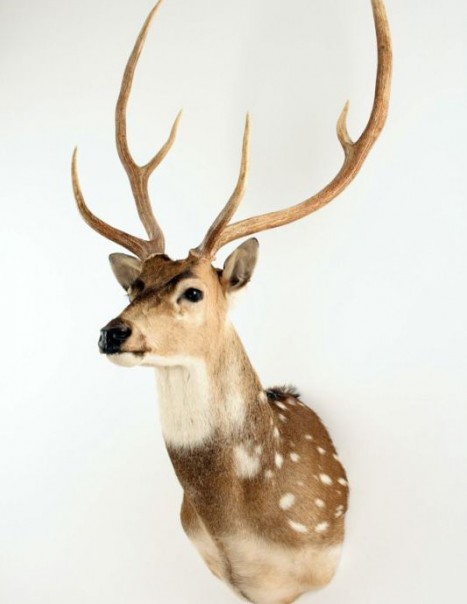 The chital is also Axis deer or spotted deer.

It lives in the jungles and wood of India. It is vegetarian and feeds on leaves, herbs, fruits and reeds.

The chital’s coat is pinkish fawn, marked with white spots and its underparts are also white. Its antlers which it sheds annually are usually three-pronged and curve in a lyre shape and may extend to 75 cm. The male chital averages about 90 cm tall at the shoulder, with a total length of 170 cm, including a 20 cm. Males, at a typical weight of 30 to 75 kg, are somewhat larger than females, at 25 to 45 kg. Exceptionally large males can weigh up to 98 to 110 kg.

Axis deer most commonly occur in herds of 10 to 50 individuals of both sexes. Large dominant stags without velvet stay in the center of the herd and are surrounded by the females and their young. Smaller stags with velvet occupy the boundaries of the herd. Sparring is more common between young stags, while older, larger stags prefer horning, pawing, and making. Stags are known to stand on their hind legs and mark tree branches above.

The chital has a protracted breeding season due in part to the tropical climate, and births can occur throughout the year. For this reason, males do not have their antler cycles in synchrony and some females are fertile at all times of the year. Males sporting hard antlers are dominant over those in velvet or those without antlers, irrespective of their size and other factors. Chital courtship is based on tending bonds. A stag will follow and guard a hind in estrus. During this time, the stag will not eat. The pair will do several bouts of chasing and mutual licking before copulation. Hinds birth one fawn, rarely two, at a time. Hinds and fawns have loose bonds and it is common for them to get separated. However, because chital tend to stay close to each other; it is not difficult for a hind to find a fawn. Fawns sometimes gather in nurseries.

Their lifespans are around 8–14 years.