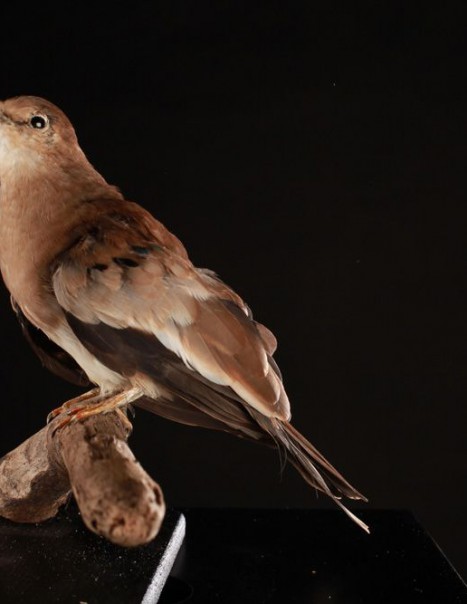 The Picui ground dove belongs to the order of Columbiformes and the family of Columbidae.

It is a small dove that especially frequents arid areas of South America. The Picui ground dove is found in Brazil, Bolivia, Paraguay, Uruguay, southern Argentina and central Chile. It winters in the north and east of Peru, in the Amazon.

The plumage has a dominant gray brown on the upper parts with more or less pinkish or ash. The forehead and throat are white. Sexual dimorphism is very marked, the female being a little less pink and darker brownish. The crown and nape are gray. The beak is dark gray or blackish. The eyes are gray. The legs and feet are reddish-pink.

It attends the arid and semi-arid as scrub, grassland and cultivated fields, sparse woods and open savannas, woodlands and plantations edges, parks and gardens in urban areas. Also visible at high altitude of 1250 meters and up to 3700 meters.

It feeds mainly on seeds grown in the fields, in the woods and undergrowth, and in the brush in small groups of 25 to 30 birds. But it is also found alone or in pairs.

During the breeding season, the male often sings from a low perch or from the ground and throughout the day. Picui have muscles that allow highly developed flight, and in general, their flight is powerful and fast. The breeding season is between October and April, the nest is a fragile structure, a platform made of twigs and lined with rootlets. It is placed between 1 and 5 meters high, sometimes above, in dense brush or a thorny tree. The female lays two white eggs. Incubation lasts 11 to 13 days, shared by both adults. Young people are feathered after 12 to 13 days, it usually produces two broods per season.

The species is not in danger for now.