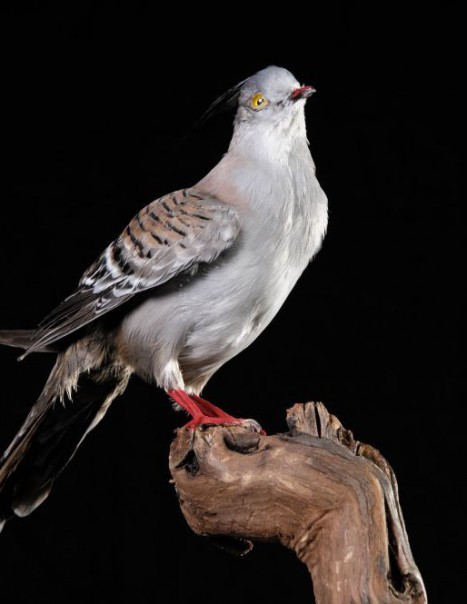 The Crested Pigeon is a species native to Australia. Both sexes are similar.

Young resembles adults with duller and browner plumage. It has a short crest with less glare on the wings. The eyes are blue-green and eye ring is blue-gray. The beak is horn-colored. The legs and feet are greyish pink.

This species lives in dry grassy areas near water and in dry open forests with eucalyptus and acacia trees near the water too.
It avoids the wetter, very arid and treeless habitats. It may be on farmland and urban parks. It is well suited to places frequented by men. Crested pigeon lives in most of the Australian continent and feeds on the ground, eating seeds from grasses and trees, cereals cultivated areas.

It is active at dawn and dusk. They sleep in a dense foliage. They run to the ground before flying if disturbed.

The cretsed pigeon can breed at any time of the year, but especially during the hottest months, from September to March. The nest is placed in the dense foliage of a tree or in a thick bush. This nest is made of twigs, but it is a fragile platform and well hidden in a thorn bush, about one to five meters above the ground. The female lays two white and shiny eggs. Incubation lasts about 17 to 20 days, shared by both parents. The couple raises the young who leave the nest after two or three weeks after birth. Like other pigeons, it feeds its chicks with pigeon milk produced by its crop. This species can produce several consecutive broods in the same year.