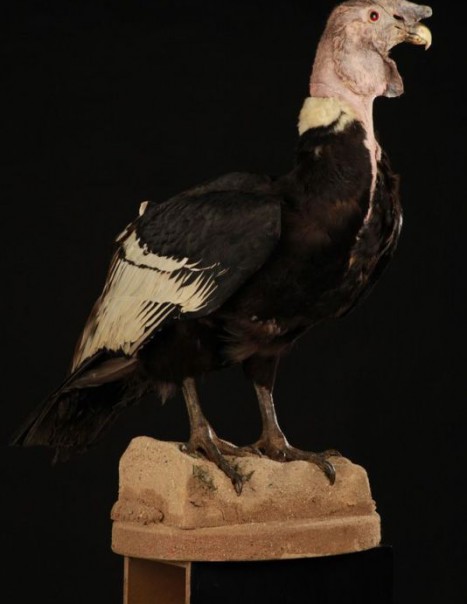 The Andean condor is one of the largest birds of prey in the world, with a wingspan of 3.20 m. It is second after the wandering albatross, with a wingspan of 3.50 m. The Andean condor measure between 1.10 m and 1.20 m, and males are distinguished from females by their larger size.
The species can live 50 years, ranking it among the birds with the greatest longevity in the world.
The Andean condor has a black plumage with a white collar. The underside of its wings and secondary flight feathers are greyish white. Its head and neck, dark purple color, are naked and change color depending on the blood flow. The male exhibits lobes under the neck and wattles on the head. Its butt shaped beak is dark gray at the base and ivory white on the end. Its eyes are brown, legs and fingers are greyish. The female has the same plumage but is devoid of wattle and lobes. It has reddish eyes, nude and black head.
The Andean condor often flies in the middle of the high peaks of the Andes with the help of updrafts. It lives in high altitude (3000-5000 m) in all non-forested habitats of the Andes to Tierra del Fuego. It can also be observed in the low plains in Argentina, along the coasts of Peru and southern Chile.
Primarily a scavenger, feeding on dead animals such as the llama, alpaca, sheep, beef … In coastal areas of Patagonia, this diet is supplemented with corpses of seals and fish, but also eggs of seabirds. It consumes on average 900 g of meat per day, but can fast one to two weeks. It is unable to kill because its morphology is not adapted for hunting. Birds living in groups, the dominant male called “apu” gives the signal when the kill.

In breeding season, every two years, the female lays a single egg, often in inaccessible ledges. The couple smolder for 55 to 58 days and the chick stays in the nest until the age of 6 months. The young will be independent at the age of one year and sexually mature at 6 years.

Revered by the Incas and national symbol of Chile, Colombia, Ecuador and Bolivia, the Andean condor is hunted since time immemorial in Patagonia. Formerly present in many countries in South America, the population continues to decline.