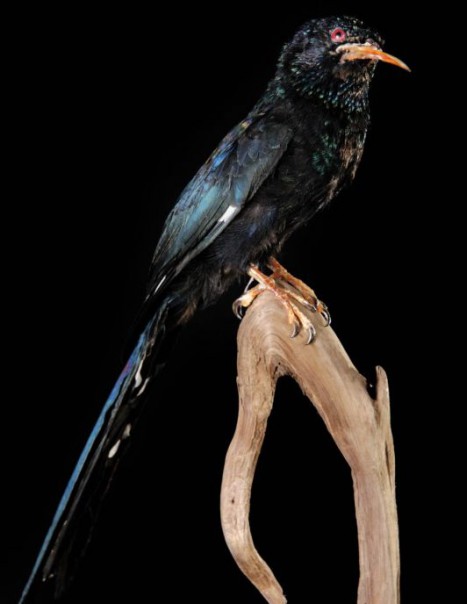 The yellow-billed cuckoo is also called, in the southern United States, rain crow and storm crow. These likely refer to the bird’s habit of calling on hot days, often presaging thunderstorms.

It is a bird of the Cuculiadae family, the order of cuculiformes.
Physically, the appearance remains the same although some differences appear in plumage color (and that of their eyes that can change color according to sex and age of the bird). Its average particle size ranges between 28 and 32 cm for a wingspan of 40 to 48 cm. Weight, meanwhile, is between 55 and 65 g.
It is a slender bird with mostly narrow beak and a long tail. They are usually dark above or bronze color and clear whitish below. It has small legs and long wings.

In terms of diet, it is mainly insectivorous with a preference for caterpillars but is able to swallow larvae, beetles, dung beetles, earthworms, slugs, snails.
For reproduction, the couple built their own nest and raise their young by allocating tasks to feed them. The nest is dish made of dry twigs and leaves, placed either two or three meters of water or in the fork of a tree above the ground. The breeding season is dependent on where they are located. Cuckoo is generally monogamous. It is a bird that can produce two broods per season.
Geographically, they are found in large wood, in orchards: in short, all over the eastern USA, south of Canada, in the Greater Antilles, Central America, Colombia and Venezuela.This bird does not parasite other nest and can live up to 5 years. Very attached to its habitat, it may be threatened by human developments and degradation of mangroves for example.
Category: Birds