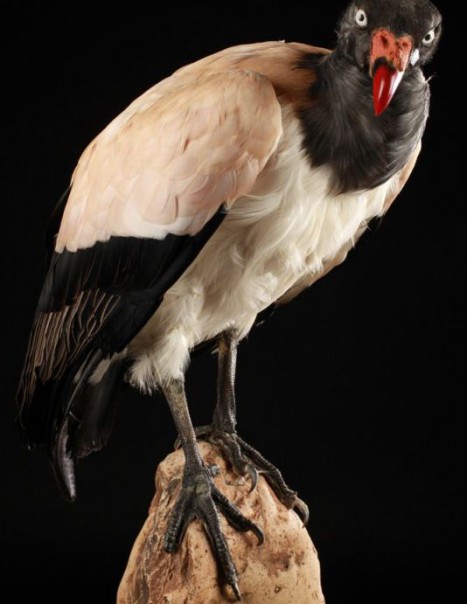 It is the most powerful vultures in the world, which comes from Central and South America. It lives mainly in tropical lowland forests stretching from southern Mexico to northern Argentina.

Its closest living relative is the Andean Condor, Vultur gryphus. It is the family Cathartidae and is the only surviving member of the genus Sarcoramphus, the other members are known only as fossils . One theory says that the name is derived from a Mayan legend, in which the bird was a king who served as a messenger between humans and the gods, it is also called “white crow” is closely related to storks and Falconiformes.

Its plumage is mainly white, with gray and black opalescent feathers at the collar, which is at the bottom of the neck, wings and tail.  Its head and neck are featherless, with varying skin colors: yellow, orange, blue, purple and red.

It has keen eyesight, there is no difference in size between males and females. This is an excellent glider, flying sometimes for hours without flapping.

This vulture is a scavenger, it hunts smaller species of vultures and also eats stranded fish along the banks.

Its only natural predators are snakes, which feed on eggs and young, and big cats. Because of its large size and its beauty, it is one of the main attractions of several zoos.

Young vultures have a totally slate gray plumage, it will be like that of the adult from the third year and will mature around  the age of five or six years and sexually mature at the age of four or five years.

It can live up to 30 years in captivity

This species is declining mainly by loss of habitat, but is not included in the census as threatened.