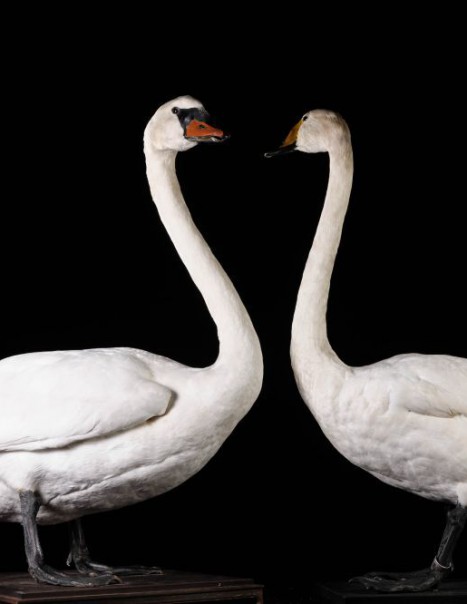 The mute swan is a species of the Anatidae family.

The Mute Swan can become aggressive, especially during the nesting period.

This is the most common swan in Europe. It is present in Great Britain, in North America, South Africa, Australia and New Zealand. In these countries, it is often considered a harmful or invasive species. It is also found sporadically in Asia to China.

This species is the symbol of the monarchy in Denmark.

The adult plumage is white. The eyes are hazel. Lores adult are bare, wedge-shaped and black. The beak is orange with black tab on the end. A black lump is present at the base: the tuber. This is typically larger in males during the breeding season. During the first year after hatching, the beak of cygnets gradually becomes pinkish. The tuber is absent in cygnets and undeveloped in juveniles. Lores are downy feathers to the outbreak. The species closest to the Mute Swan is the Whooper Swan, but it is larger and heavier.

The mute swan can take off from the ground or water. It needs to run a distance of 8 to 10 meters before flying away. It can fly at a speed of 80.5 km/h and not exceed a height of 150 m. The mute swan usually arises on the water but occasionally uses land or ice. This species moves on the water easily. Wings are often slightly higher which enables it to be pushed by the wind. Adults can dive to a depth of 10 m. During molting, individuals push the water with their wings to move faster. Young often walk on the backs of their parents.

The mute swan also feeds on the ground with terrestrial plants, grasses and some invertebrates, small snails, slugs and insects eaten with the leaves to ingest. It uses three methods to feed: surface supply, the plunge of the head and neck and the plunge of the body.