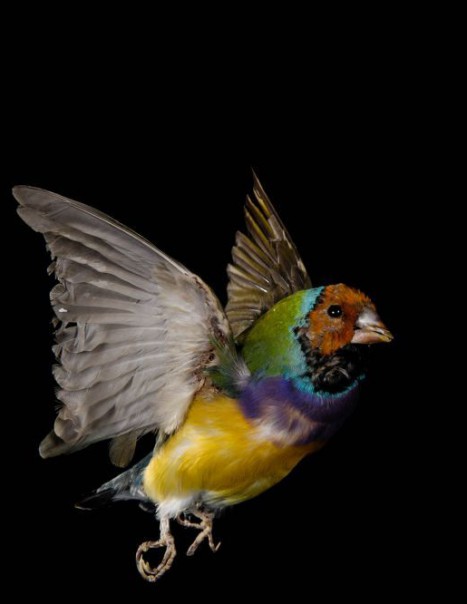 The gouldian finch is a species of small passerines considered endangered by Australia, there would be less than 2.500 of these birds free, although the species is widely used as an ornamental bird.

It measures 13 to 15 cm long. Both sexes have a highly colorful plumage with parts of the body black, yellow, green, red or other colors. Usually the back is green and the belly is yellow. The head can be of three different colors: black, red or orange, beak is white but the tip is red for males and black for females (in breeding). The chest is violet for the male and purple for the female. The female resembles the male, but its color is more in pastel colors and tail shows no long threads.
We mostly find it in northern Australia to Queensland. It inhabits wooded savanna plains eucalyptus near mangroves and water points. During the rainy season it migrates to the south, on the other side of Australia.It feeds mainly on seeds that it provides not on the floor but on long grass. During the breeding season, it feeds mainly on insects: beetles, termites, flies and spiders. It lives in flocks of several hundred individuals.

It nests near water in a termite mound, in a tree cavity, in a bush or occupies abandoned nests.

Couples are faithful throughout their lives. They breed at the end of the rainy season when food is abundant. The broods are 4 to 8 eggs.