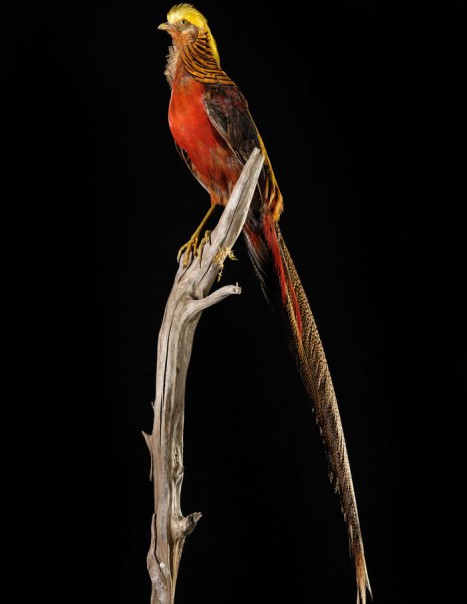 The golden pheasant is a bird of the Phasianidae family and order Galliformes.

Like its cousin the pheasant Lady Hamer, it is native to China and was introduced to Britain.

Its call is metallic and it sings during the breeding season to attract females. It prefers to move on the ground and fly.

The species has a great sexual dimorphism, the male having a brightly colored plumage, while the female wears a discreet plumage, essential for brooding. The female, hen pheasant, has more subdued colors. Juveniles are quite similar to their mothers with a plumage dotted with red spots.

The Golden Pheasant is omnivorous, it finds its food in various plants in the leaves, shoots, flowers. They also eat small invertebrates, such as insects or spiders. To find food, it goes down from the mountains where it lives normally.

It is lonely, couples are forming for reproduction, in early spring. The male attracts a mate by its singing and tries to seduce a courtship.

The nest is usually hidden in vegetation . The female lays 5 to 12 eggs that will hatch reddish eggs only for 22 to 23 days, without eating or drinking. Young can fly after two weeks, but will not leave their mother until they reach their adult size, at the age of 4 months. They are sexually mature after one year for females and two for males. These will have to wait another year to take their adult plumage.

The Golden Pheasant can live up to 15 years.