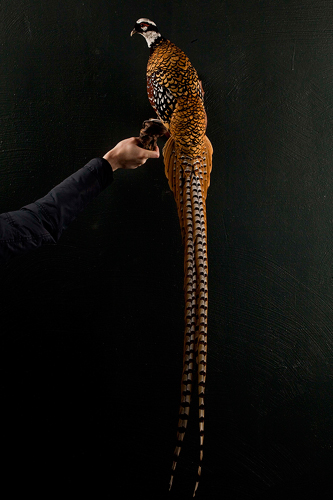 The Reeves’s pheasant has a white head with a broad black band at the front, from the eyes to the neck. A small white spot behind macula of the eye. The head is separated from the body by a narrow black collar. The rest of the plumage is golden brown, with piped black feathers.

Present in temperate forests of North China, in different types of forests at altitudes between 400 and 2600 meters. It frequents broadleaved forests dominated by oaks. In winter, altitudinal migrations are rare, except when significant snow cover makes it difficult to search for food.

It often feeds on the ground and perches to sleep. Its flight is fast allowing it to escape predators. The species is in decline because it is considered a plague for agriculture and hunted for its beautiful ornamental feathers

The groups of about 10 individuals in winter, and between 4 and 8 in the spring, often nest in pairs during the breeding season that occurs between mid-March and mid-July. Usually it is quiet, but the male can sometimes mark his territory by a combination of screaming and roaring of wings. The male is normally monogamous but may exceptionally practice polygamy. The nest is placed on the ground under a bush or grass. It is built of pine needles, grass and leaves. Clutch size varies from 6 to 10 eggs which incubation is performed by female alone.