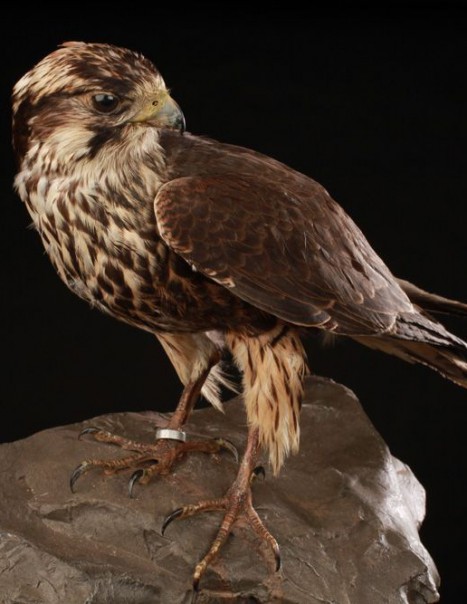 The Lanner Falcon is a species of diurnal birds of prey belonging to the Falconidae family.

Its beak is short and bent from the base. The size of the peregrine falcon, it is distinguished by its pale coloration, its longer tail and less pointed wings. Its appearance is more slender and its beating wings is less vigorous. The top of the head is wearing a red hood, the front is white. A thin black mustache through the fair cheeks just under the dark iris. The beak is gray-blue. The top back is uniformly slate gray with a contrasting moderately rather pale belly whose dominant is the creamy white or red.

In Africa, it nests in semi-deserts and deserts of the Moroccan Atlas to Libya and dry savannas. In Europe, it frequents rocky landscape with steep cliffs and the coastal cliffs. Lanner falcon is known for its fast and agile flight. It is found on the African coast and inland from Mauritania to Egypt, Italy and the Balkan Peninsula, Turkey and Asia Minor.

It lives in couple and group hunting. The female plays the role of reel and flushes the victims while the male stands back, ready to pounce on the prey. This technique allows the Lanner falcon to ensure sufficient resources for survival. It is sedentary and do not build a nest, but prefers spoof of old nests of crows or hawks areas abandoned, located on a ledge, a steep promontory or tree. The female lays two to five eggs between mid-February and late March. Both parents each convent turn for 30 to 35 days. The fledging occurs some forty days after hatching.

Affecting the open spaces, Lanner falcon especially stalking and hunting birds such as pigeons and jackdaws but also smaller raptors such as kestrels. It also feeds on the occasion of small  and medium mammals, reptiles and large insects.

This endangered species is cataloged in the EU, its population does not exceed 200 pairs.