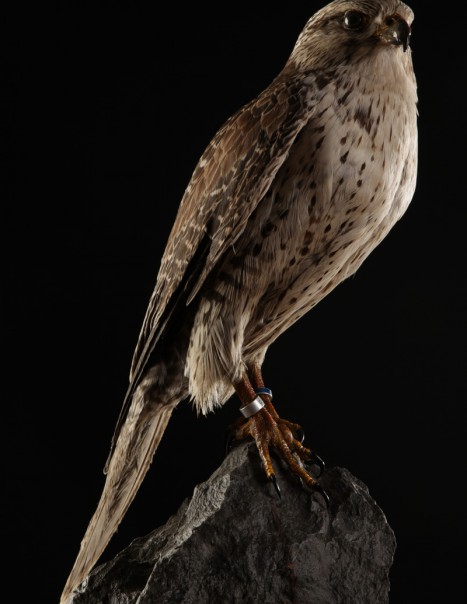 In the dark phase, the upper parts are entirely of deep gray sometimes tinged sepia, with pointed spots and dark bars and feathers with clear edges. Wings are darker, especially the ends. The tail has light bars and the end is white. The underside of the wing has white barred with dark blankets. Chin and upper throat are usually white. The beak is gray with yellowish wax. The eyes are dark brown. Legs and feet are yellow.

The female is larger and often darker than the male and juvenile is generally darker and browner. The legs, feet and beak are gray.

The plumage varies by region. Birds of the High Arctic and Greenland are usually white, while those of Labrador are dark brown to blackish. In Iceland, there are more gray phases, in Russia and Siberia, there are about two gray phases for a white.
The gyrfalcon is usually quiet, but close to the nest, it is noisy. It attends the tundra and taiga, up to 1400 meters above sea level, sometimes higher.
Its favorite habitats are tundra near water courses bordered by cliffs, the rocks where nesting colonies of seabirds, mountains and cliffs.
In winter, migratory frequent cultivated areas, coasts and steppes. It is found in the Arctic regions of Eurasia and North America, Greenland and Iceland.
Adults are sedentary in general but young can disperse southward in winter.

It feeds mainly on birds and mammals such as lagopus, ground squirrels, and seabirds. It hunts by flying low to the ground and capture the birds after a brief chase. It flies very fast and can suddenly rise and then make a quick descent. It also feeds by flying right to left or seeking prey from a perch.
Preys are usually taken on the ground or in water and in the air, but some aerial chases are very fast.

Male performs several courtship displays; it flies parallel to the cliff where it makes eight figures right in front of the nest. These parades are accompanied by screams and the male often carries food. Then it leaves the site while the female remains. Usually, a dip following the parade.

It feeds on lagopus, grouse, lemmings, voles carrion and in large quantities.
The populations appear relatively stable, but this raptor is very discreet and difficult to observe.
Gyrfalcons also breed in captivity.