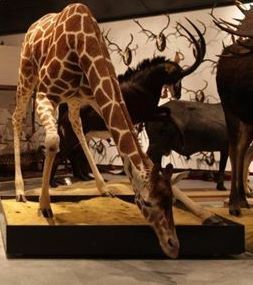 Mammal of the family Giraffidae, reticulated giraffe is an animal that lives mainly in Africa (Kenya). Its natural habitat is the savannah where it has also long suffered from poaching because its skin was so unique popular. Today it is one of many animals protected by the new protection standards.

Its silhouette is known to all since the beginning of time: up to 5.80 m high and 4m long and 750 to 1500 kg, the giraffe is one of the most fascinating animals of the savannah. His neck which is half its size is only supported by 7 vertebrae.

There are several species of giraffe, reticulated giraffe has the distinction of being located in Kenya and especially to have a dark brown coat marked with white lines.

The giraffe eats leaves, buds or fruits it finds in the trees to catch, it has a very long black tongue. The giraffe lives in family groups consisting of many individuals, males fight each breeding season to see who will fertilize the females that give birth to a baby giraffe once every two years (gestation lasts between 440 and 450 days) .The female can be fertilized from the age of 5.

Particularly handicapped by its large size, giraffe sleeps only two hours a day, mainly during the day where it can continue to monitor around it: indeed, its sleep is actually composed of three minutes micro sleeps. The giraffe goes amble, it means that it is one of the only animals in the world (with the camel and the bear) who lift both feet together on the same side which gives it a look special enough. When it runs, it usually goes to 15km/h, but if it feels threatened, it can reach top speeds of over 50km/h!

Its longevity is situated around 30 years depending on if it is in captivity or in the wild.