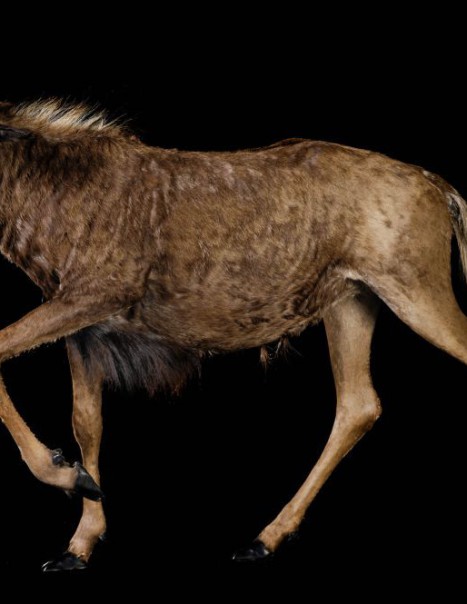 The black wildebeest has a chocolate-colored coat and not black, it has a beard and a very bushy mane. This animal is recognizable in particular because of its tuft of hair that covers its nose. With a tail measuring about 90 cm and wide curved horns and pointing forward 60-70 cm on average, black wildebeest can measure between 1m to  1m20 with a weight ranging between 110 and 180 kg .

In terms of habitat and geographic distribution, black wildebeest likes to live in large meadows in the acacia savanna or light woods, near a water source. We find them in South Africa, Lesotho and Namibia where it was introduced. It likes to live in herds (tens of thousands)

Incidentally, power issue, wildebeest is a ruminant herbivore and feeds mainly on grasses, leaves of bushes and shrubs. Note that it may exceptionally not drink for a week.

The dominant male will mate with the females of his harem and it knows how to defend its territory against other males. It is interesting to note that the females will give birth in a few days apart in order to best protect all scopes. The white-tailed gnu gives birth to 1 or 2 babies per year for a gestation of almost 8 months. It lives up to 20 years.

The animal is not endangered because of the number of individuals increases continually, there are nearly 18,000 individuals of which 80% live in private reserves in South Africa.

Wildebeest are very noisy animals, their cry is either a short or explosive snoring and a plaintive groan.