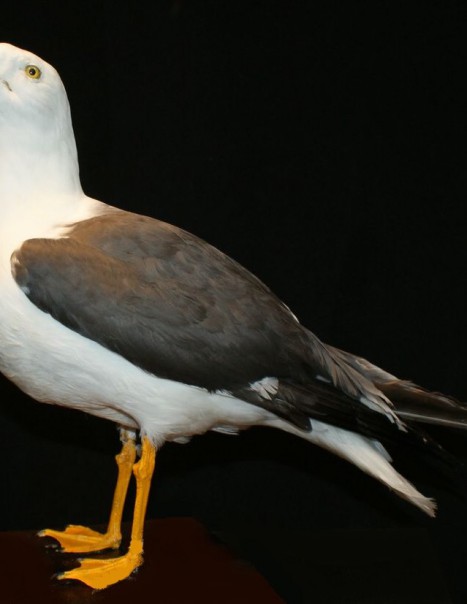 Barely larger than the herring gull and the smaller of the black-backed gulls, its coat is dark gray to black, the rest of the body is white, the legs are yellow to orange-yellow,  as its end spout with a red spot on the lower mandible. In winter, adults have striated gray head. Young first year appear very dark in flight. They get the adult plumage the third year and have an approximate lifespan of 26 years.

It is a migratory omnivorous bird.

It breeds on coastal cliffs, buildings, dunes and marshy moorland. It spent the winter on the coasts, estuaries, inland lakes, reservoirs and landfills. It is a scavenger following fishing boats in search of waste and frequents ports and landfills. It lives in large groups, its flight is powerful, impressive in its magnitude and its fast kinks dive.

It nests on the ground or on the edge of the cliffs, sometimes in more sheltered by heather or bracken areas. The nest is built by both parents and is made with herbs, seaweed and feathers. Laying occurs in May and June with three brown-olive or greenish eggs with dark spots. Incubation lasts about 27 days, by the couple. Youth, feed mainly by female, fly after five weeks. The chick or grisard, has a clear and brown striped duvet. It will be fed until the age of 42 days.