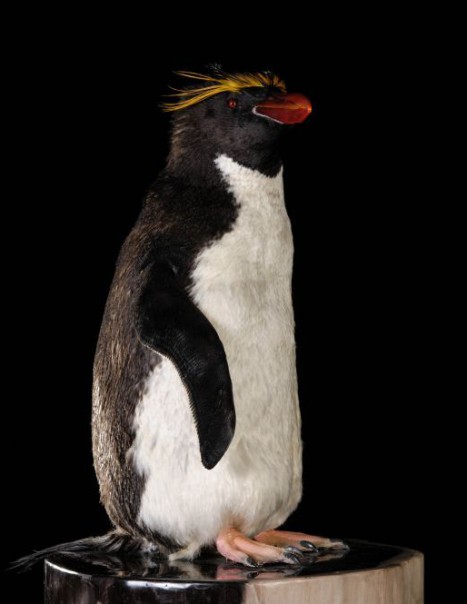 The Rockhopper penguin is the smallest of the genus Eudyptes.

On the head, the yellow crest is formed by two separate parts, each consisting of a yellow eyebrow extending behind the eye thinner and longer feathers. As can be seen a black crest on top of the head.
The thick beak is pinkish red or reddish horn. The eyes are red. The short legs and webbed feet are pale pink with black claws. Male and female are similar in appearance, but the male is often larger, with thicker beak.
The chick’s head and upper parts are gray and underparts are white.

The Rockhopper Penguin is a subantarctic species. There are three subspecies:

The Rockhopper penguin can be noisy during competitions for a territory, for a partner and for the materials of the nest. It is a marine and pelagic animal. It breeds on the rocky shores, cliffs, lava flows and the steep slopes, often near the coast, but inland, among the tufts of grass.

It feeds offshore on fish and squid caught after an underwater chase during which webbed fingers and fins are used for swimming. Unlike many penguins that move by sliding on its stomach, the Rockhopper Penguin prefers jumping on the rocks.

It remains in the sea from April or May until September or October and returns after molting, before starting its breeding. It is found in the Falkland Islands on the coast of Argentina, South Africa, New Zealand, Australia and Antarctica.

The breeding season varies according to the distribution. It breeds in colonies from sea level to the top of the cliffs, and sometimes inland. The nest is a depression scraped in the ground, lined with dry grass, but there are also stones and bones. The female lays two eggs and incubation lasts 32 to 34 days, shared by both adults which take turns whose duration varies from 7 to 17 days. The chick is hatched by the male while the female fishes and provides food. The male is able to produce milk that it regurgitates for the chicks. They molt and leave the breeding ground for the open sea at the age of 65 to 72 days.
They have a lifespan of about 10 years.

The Rockhopper Penguin does not fly in the air but only under water! Its webbed fingers and powerful flippers propel it quickly when pursuing prey. The Rockhopper Penguin is preyed upon by sharks and marine mammals when it is at sea. On the ground, petrels, skuas and gulls take eggs and chicks.

The species is considered vulnerable and is currently protected by law.