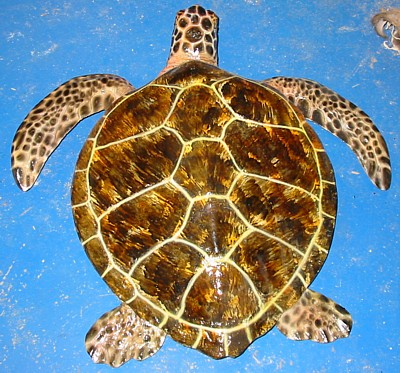 The green turtle is a turtle present in the tropical waters of all oceans, but more or less often depending on the region. It prefers shallow waters and rich in seagrass but are not circumscribed.

The shell measure on average 110 cm for a weight between 80 and 130 kg. Some specimens can reach a weight of 300 kg for a carapace length of 1.5 m. Oval shell is flattened for better hydrodynamic, its width is about 88% of its length. Its head is small and represents about 20% of the length of the carapace. It has only a single pair of prefrontal scales. The edge of the lower jaw is coarsely serrated while the upper is provided with high ridges on the inner face.

This turtle is primarily carnivorous, it eats small invertebrates and fish eggs. Then it feeds almost exclusively on seagrass plants. This diet is supposed to give a greenish color to its flesh. Their herbivorous diet distinguished individuals of this species in danger of extinction, other marine turtles. They may also eat some molluscs and sponges.

Sexual maturity can be reached between 8 and 15 years. When it reaches sexual maturity, the female lays its eggs every 3 to 6 years on the beach where she was born and she returns to the ocean. It mates near the beaches and the females will lay eggs up to six times, which will take it about a month and a half. It begins with ensuring the safety of the beach from the waterfront. It should not be lined with vegetation, neither too wide nor too narrow. Once high enough on the beach, she starts digging its body cavity, a hole once and a half times its thickness. She lays 20 to 250 soft eggs, about the size of a golf ball, 5 to 6 kg. She covers the hole after about twenty minutes from laying. The incubation time is 45 to 70 days depending on the temperature.

An adult green turtle can swim 1,000 km between its nesting area and its feeding area. It’s the fastest turtle: it can reach a speed of nearly 35 km / h.

Animal predation is especially when the eggs hatch because the species is threatened by crabs, birds and mammals venturing on beaches. However, eggs are also directly threatened by insects. Once at the water, young green turtles are still not safe, they become the prey of cephalopods (octopus, squid) and large fish. Later, the predators become sharks and saltwater crocodiles in Australia but mostly the men who fish, sometimes inadvertently but especially for its meat. Pollution is a certain threat and proliferation of diseases such as fibropapillomatose seems to indicate so. Finally predation on eggs remains very important despite precautions taken by local authorities.