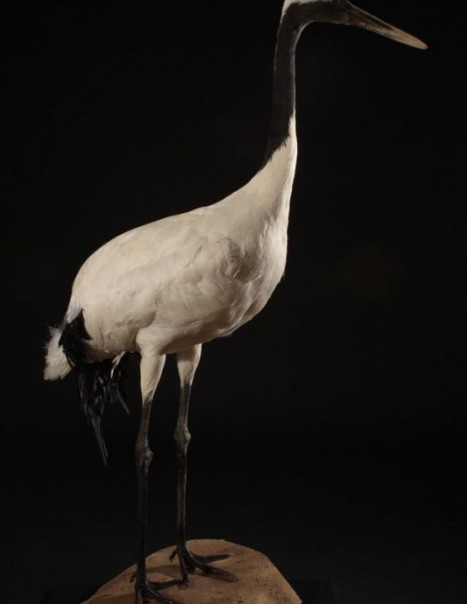 This crane is the only member of the family Gruidae to live at high altitude between 3000 and 4900 meters. However, it goes down to lower areas in winter.

The adult has greyish white plumage with black primary and secondary and upper tail feathers. The neck is black, giving its name to the species. The bare skin of the cap is red. The long beak is dull yellowish. The eyes are yellow. Long legs and feet are dark gray. Both sexes are similar.The juvenile has the more grayish yellow plumage. The neck is black and white, while the head is chamois. It will have full adult plumage after one year.

It breeds in moist, grassy areas, pastures and meadows, wetlands, rivers and lakes edges. In winter, it gets to lower areas, open and cultivated fields, and also frequents rice field.

It feeds on plant matter and animal food such as roots, tubers, large insects, snails, shrimp, fish, frogs, lizards, small rodents, voles. They feed in wetlands, rivers and pastures.
During the breeding season, is in the humid highlands. As with all other cranes, courtship displays are noisy and dramatic. These parades are also used in social behavior to ease tensions and strengthen pair bonds. Cranes fly very well. Breeding season occurs in spring, with laying between early May and mid-June. It nests high in the wetlands with shallow fresh water. The nest is built on a small grassy island or water. It is made with aquatic vegetation, sedges, grasses and mud. The female lays two eggs. Both adults incubate the eggs for 30 to 33 days. The nest site is vigorously defended by the male. Chicks are covered with brown fuzz. They are feathered and can fly three months after birth.

Black-necked Crane is threatened by the degradation and loss of habitat on the wintering grounds. This species is considered vulnerable because of its insignificant population and restricted distribution.