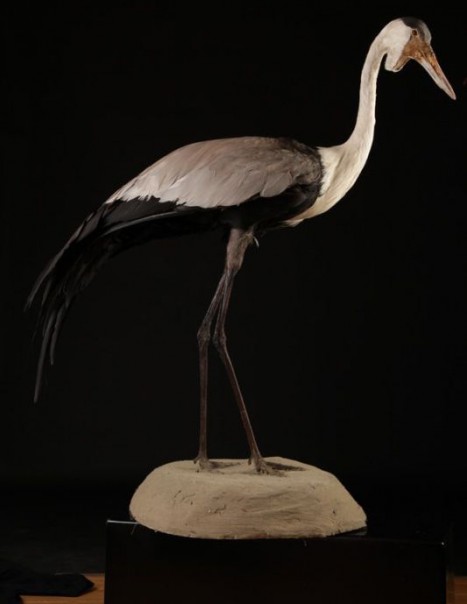 The Wattled crane is one of the largest species of Gruidae, the second after the Antigone Crane and most African species.

The adult has the upper parts and gray wings. The secondaries are longer and extend beyond the tail and almost to the ground. Flight feathers and tail are dark gray to blackish. The upper back is a darker gray. This crane has a white neck and chest contrasting with the black lower and upper parts dark gray back. The beak is long and straight and of horn color. The eyes are orange-red. Legs and feet are dark gray to blackish. Both sexes have identical plumage, but male is larger than the female and the species is rather silent. Juvenile has brownish plumage of the body.

The species is highly dependent on wetlands, it is common in large areas wet in the basins of the Zambezi and Okavango rivers, as well as permanent and seasonal wetlands in the highlands of Ethiopia and South Africa. It breeds in wet areas with shallow water where grow sedges and above 2000 meters. Outside the breeding season, it is found below 1000 meters.

The Wattled Crane is located in Ethiopia, Zaire, Zambia and Tanzania to Botswana and Mozambique. There are also populations in Angola, Namibia and South Africa.

It feeds on plant matter such as roots and tubers of aquatic plants. It also catches insects, snails, frogs and some small vertebrates. Its long beak allows it to probe into the soft soil and wetlands. It also frequents cultivated fields and drier plateaus where it finds grains and grass seeds. Outside the breeding season they live in groups.

Like all cranes in breeding season it performs superb parades, dances with bows, jumps, races and plant pieces of jets. They dance with wings raised, between partners during courtship, but also with other members of the group to maintain cohesion and contacts. The male spreads its wings wide before going briefly to run, then it jumps in the air.
During these parades, red skin of the face is inflamed and swollen and wattles stretched. Pair bonds last a lifetime.

The Wattled Crane breeds in wetlands in wet grassy expanses or marshes with sedges where nests are spaced at least 500 meters. Parents become territorial. It does not migrate, but performs some movements depending on the availability of water and seasonal wetlands or the highlands tend to move more than the populations living near permanent water.
The breeding season is highly variable and depends on the water level. It takes place in July and August in Ethiopia, and between April and October in the more southern populations.
The nest is a large aquatic vegetation mound surrounded by water, with a good view around. It can grow up to 120 to 180 cm in diameter.

The female usually lays two eggs, but often only one chick survives. Incubation lasts 33 to 36 days shared by both adults. Alongside them, they learn to feed themselves. They are completely feathered after one year and are sexually mature between 4 and 8 years, but this species can live 20 to 30 years and more.

They feed on tubers, roots, aquatic plants, chestnuts water, lilies, insects, Orthoptera, Coleoptera, snails, frogs and several small vertebrates.
This crane has a long beak and probe into the soil to find food. It also gleans in cultivated fields where it recovers grains and seeds of grasses.

This species is considered vulnerable with small populations and low levels of reproduction.