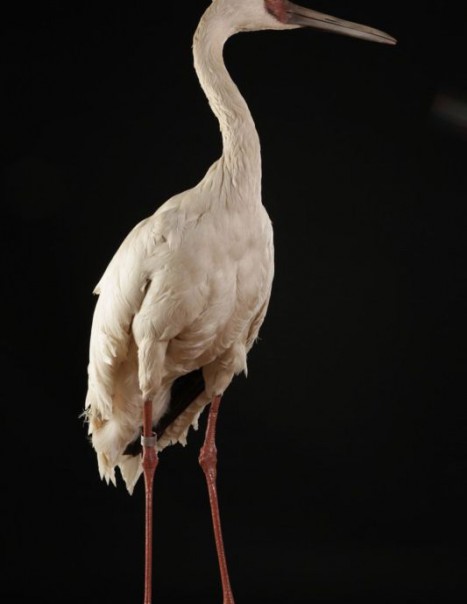 The siberian crane is part of the Gruidae family.

This wader is white. But its long beak and head are covered with feathers, the skin is visible and bright red. Its long legs are red-black and the biggest wing feathers are black. Its wings completely cover its tail. It measures 1m30 with a wingspan of over two meters and a weight of ten kilograms.
Like all great waders, Siberian Crane are particularly fond of insects, amphibians and even small rodents. Their diet also consists of plants. With nesting and chick birth, the crane must have a very rich diet. But when come the winter months, it migrates and is found in the tundra where food is less abundant. So it eats roots and small shoots.Cranes couples have a large territory they fiercely keep to the migration. They find back that territory almost every year.

The nest is made of grass and reeds. This forms a small mound of about 15 cm in height.
The female lays one or two eggs depending on the year and depending on the amount of food. Like all large birds, they favor a small number of eggs, but the chicks are very high and almost 100% chance of surviving. Incubation lasts a month and the chicks can fly after 70 days.Compared to other cranes, they are the most demanding in terms of habitat. It must necessarily have a waterhole in its territory to be able to feed and nest. It appreciates the large sparsely populated areas, tundra and wetlands. It is found in almost all of Asia. This is the only part of the world where we can observe it.

Siberian Crane is threatened by the development of peoples who are interested in water points affectionate by these waders. Conservation plans of this species have been introduced in order to save it.
It is the third most endangered species in the world. The loss of its environment is the main cause of this threatened.