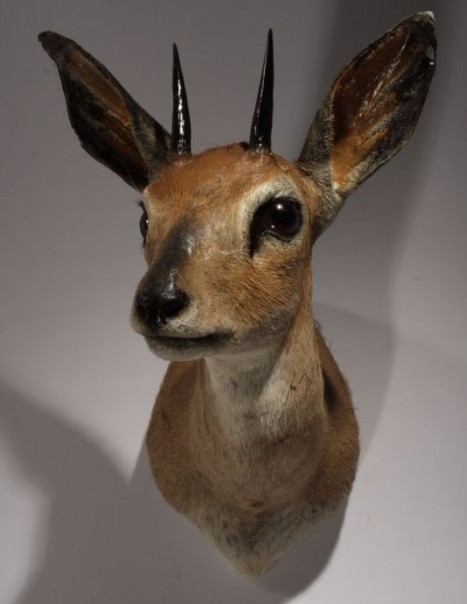 The grysbok is a mammal that belongs to the antelope family.

This species is small. The male differs from the female by its horns and its shape is less corpulent than the female.

The physical appearance of a grysbok can be described by an adult weight of 10 to 12 kg, a body length of 80 cm, a shoulder height of 55 cm and a horn length ranging from 10 to 12 cm in male .

In open areas, grysbok leads a single life or a life couple. Its body covered with bush enables it to resist against the change of temperature. African antelope are generally in herds while grysbok does not have this behavior to live in community. Sometimes found alone or in the company of two or three antelopes of the same type.

The small size of the animal does not allow the viewer to observe it better because it is easily lost in nature. It usually appears late in the afternoon or at dawn. In the presence of heat, especially in the day, grysbok rests in cloth grass or in the shade of a bush. Waiting for the sunset, the animal dozing and ruminates. However, this natural timid antelope is able to detect the presence of an external few meters, even in its state of rest. So, do not get close if the animal ran away immediately. The surprising speed grysbok, allows it to escape the carnivorous predators.

The antelope grysbok has a diet rich in young leaves and branches. It does not eat grass because it picks rather than grazing.

Grysbok’s cry is heard during the rut, it reveals a kind of plaintive bleating and suffocated. Apart from that moment it is silent the rest of the year.