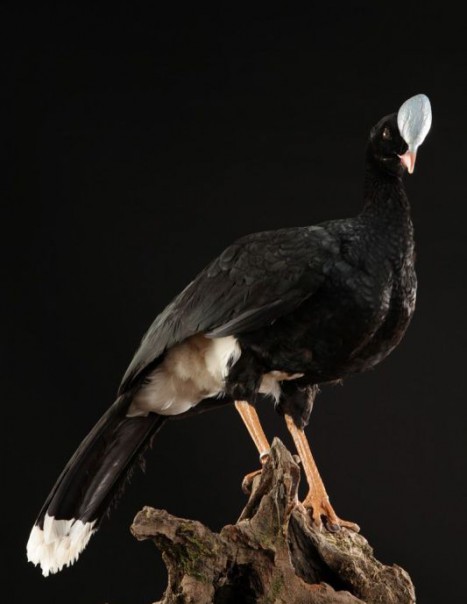 The helmeted curassow is a bird of the cracids family and order of Galliformes.
It is found in South America, especially in Venezuela and Colombia. The natural habitat of this owl is found in the dense rainforests of the high mountains of the country.
The helmeted curassow is one of the largest birds of South America. It measures between 50 and 92 cm from head to tail. The weight of this animal varies by sex. The male weighs about 4 kg and females from 2.25 to 3.9 kg.The whole body of the bird is covered with black feathers, except its tail; the ends and bottom are white. The belly of the helmeted curassow is also white. Some observations have shown that females of this cracidé are sometimes fitted with brown feathers. The helmeted curassow is distinguished by its head that is small compared to the entire body. The blue appendage that is on its forehead is another characteristic of this bird. Added to this, are its orange beak and short legs.

Its feeding consists mainly of fruits, berries and seeds. Occasionally, this diet is decorated with animals such as insects and small rodents.

The breeding season begins in December and ends in June of the following year. If for some birds, males must compete among themselves over who gets the favors of the female, it is not the same for the helmeted curassow. During the mating season, the male provides food to the female. If she accepts, this marks the formation of a couple. Both partners then begin preparing their nest carrying halfway up a tree twigs and grass. The female lays two cream eggs hatch after 22 to 34 days incubations. Parents feed their chicks in their nest until the latter are able to leave the nest and fly this at the age of 20.