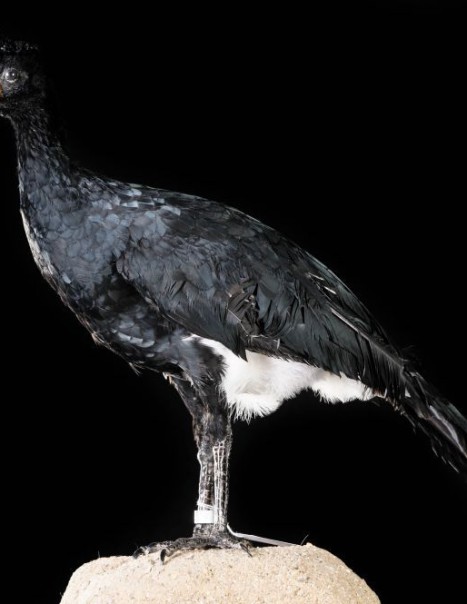 The wattled curassow is a species of the Cracidae family.

It measures 89 cm in length. It has a black plumage except in the abdomen where it is white. It has a tuft of black feathers. Males have a rounded tubercle at the top and two scarlet wattles. The iris is dark brown. The legs are pink.

It is found in the west and south of the Amazon basin of Brazil, in the Andes, Colombia, Ecuador, Peru, Bolivia. This large forest bird, with remarkable qualities, ownes its original name tp fleshy growths that adorn the top and bottom of its beak, the male in fact has two pending wattles under the beak and a bulbous protrusion on top. These ornaments are a beautiful scarlet red color during the breeding season. Males sport a black crest feathers made of tightly curled while females have a finely barred white peak. In hoccos globular, juveniles are similar to adults.

The wattled hocco has a very close relationship with the Blumenbach hocco, mainly because of the great similarity of male plumage. They frequent the humid and tropical lowland forests, barely exceeding the 300 meters, it has a steadfast aversion swamps, everything seems to indicate the contrary that this species is strongly attracted to water points. It is found in effect in seasonally flooded forests, islands covered with trees in the middle of the river or nearby lakes and reservoirs.

The wattled hoccos are arboreal birds. They stay on the top floor of the vegetation, sometimes at a great height and they are identified by their long whistles. They rest there and they eat it. They rarely go to the ground. The wattled hoccos usually live in pairs or in small family groups of 3 or 4 people maximum.

The nesting season takes place in June. It is during this month of the year that parades and eggs are the most numerous. Males draw their head down, tail stand to reveal the white of their coverts and trot in a circle around their partner. When the pair is formed, it usually builds the nest in common, but it happens that the male takes the initiative to build its nest alone before going in search of a mate. Only the female incubates the 2 to 6 eggs she lays. The male stands guard and defends the territory. Most babies are born in July. They stay with their parents until their growth is fully completed.
The wattled hocco has a varied mixed diet of organic and plant materials. It feeds on small fish, insect, aquatic crustaceans and other small animals that are found in flooded forests or along the river banks. It also swallows seeds and fruits. It depends on the abundance of seasonal resources. They forage mainly in the branches in vegetation and rivers that support them.
Category: Birds