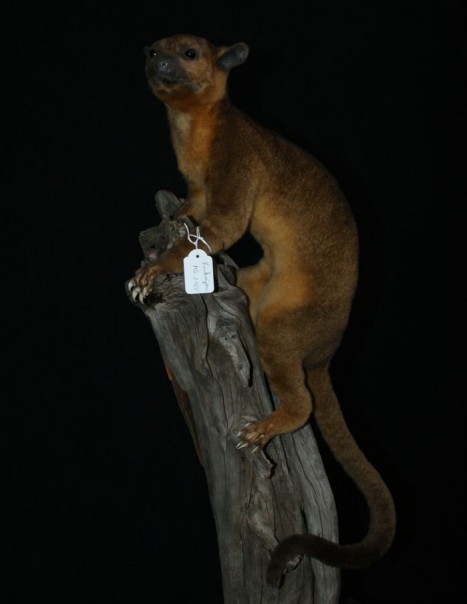 Kinkajou or potos – Potos flavus
The kinkajou is a mammalian tree species mustéloïde. It is a nocturnal in wet forests in Guyana, in the Amazon, Andes and central America. Strange animal even for natives, kinkajou long remained unclassifiable. There is a biological curiosity among carnivores, and physiology by his behavior.
The adult measures without the tail 45 to 76 cm, a height at withers of 20 cm and an average weight of 3 kg. It covers only two teats. Sexual dimorphism is low, the females are on average a little more slender frame and a weight roughly equal.
The coat is dense, silky and lightly crimped, it is neither flush nor long, the color of their coat is subtle beige, brown to reddish and light fawn, with variations of white and yellow sometimes pulling up to orange.
This carnivore with its prehensile tail serves it as a fifth member. Each of the four legs is extended by five very loose fingers topped with pink cushions and sharp, curves, long and non-retractable claws. This combination allows it to move like an acrobat with agility and flexibility in trees.
The tail, by which it hangs to release its four members, is not used for catching food but it wraps it around his body at the time of falling asleep.

Kinkajou differs from other carnivores by second longest toe than others. The muzzle, pointed, is relatively prominent and ends with a dark brown or pink nose. Head, rounded, is surmounted by two low and wide ears. The face draws a heart. As the coati, its teeth, is particularly characterized by two very prominent lower canines and premolars and molars for chewing unfit, which earned him the title of carnivore. It feeds in a manner quite similar to that of the spider monkey, it eats more than thirty-seven kinds of different fruits, less than a tenth of its diet consisting of leaves and flowers. Its regime is that of an opportunist and is very variable depending on the season and the region