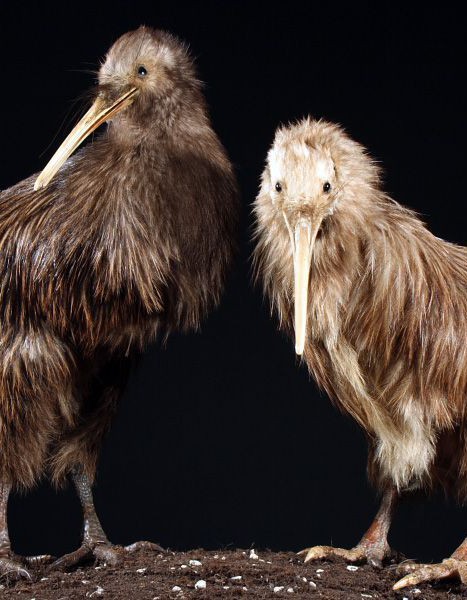 Kiwi is a bird of the order of Apterygiformes and aptérygidés family. This is the last of the race of Moas. This is an animal in danger of extinction. It is protected from the 20s. In fact, it is prized for its plumage-like hairs. Trout fishermen use it as bait to mimic a fly.

The order of Apterygiformes includes all flightless birds like the kiwi.

A kiwi weighs between 1 and 5 kg. As to its length, it can measure between 35 to 65 cm long. Its measurements make it look like a hen. It has small useless wings. Its legs are very short and very robust. It has no tail. Its plumage is very rare compared to other birds. It is brown or black. Its beak is very long. Its nasal cavity are located on each side of the beak.

It is found only in New Zealand and neighboring islands. It lives in forests, woodlands and scrub areas. It can live up to 1200 m altitude.

It is a nocturnal animal. In other words, it sleeps during the day and hunt at night. Its view is not used it much. However, it spots its food through its keen sense of smell.

The kiwi buried away in its beak the ground to find insects for food. It feeds on berries, worms, lizards, frogs, crayfish, etc.

The mating season begins in March and ends in June. The coupling results in a monogamous couple. The female lays 1 to 2 eggs after a gestation period of 7 days. The size of each egg can reach the ¼ that of the mother, or roughly 400 g. The male incubates the egg for 60 to 90 days. The couple lives in a burrow, a tree trunk or a very dark area in the woods.