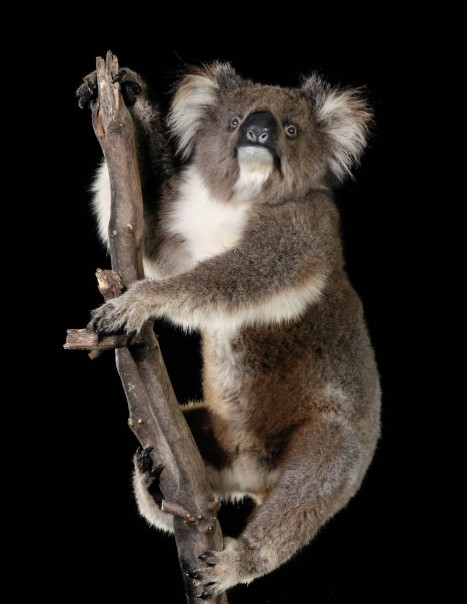 The koala is a solitary herbivorous mammal of the order of marsupials and Pascolarctidés family.

This is a typical animal species from Australia, focused on the East Coast, between Victoria and Queensland. Its name comes from the Aboriginal language whose meaning is “not drinking”. This feature comes from its metabolism that allows it to rehydrate to 95% from the eucalyptus leaves that constitute their diet.

The koala has a big nose with rubber appearance and large pointed ears. Its fur is very thick to protect it from the rigors of winter. Its pear-shaped body allows it to be stable when sitting in the trees. In order to have more comfort when seated, its backside is more dense than the rest of the body. Its mouth is provided with teeth to crush the leaves. It has many very sharp claws to help them to climb in the trees. Its size is approximately 80 cm and an adult weight of 5 to 10 kg.

Its diet consists mainly of eucalyptus leaves. It is a nocturnal animal that can eat up to 1 kg of leaves each night. It spent more than 19 hours a day sleeping because of its food that is not nutritious.

When in heat, the koala is very active. Males rub their chest against the trunks to mark their territory and depositing pheromones. It is a gland, brown, to differentiate males from females. Sexual maturity is 1 year for both sexes. The gestational period is between 25 to 35 days. Females give birth to one baby at a time. At birth, the baby is called “cub” moved into the front pocket of its mother where it will come out after 6 months. It will be fed with milk and leaves previously chewed and digested by the mother.

The life of a koala is 13 years in the wild and 18 in captivity.

The koala is not yet listed as a species at risk. However, the deterioration of their living environment of human act constitutes a real threat.