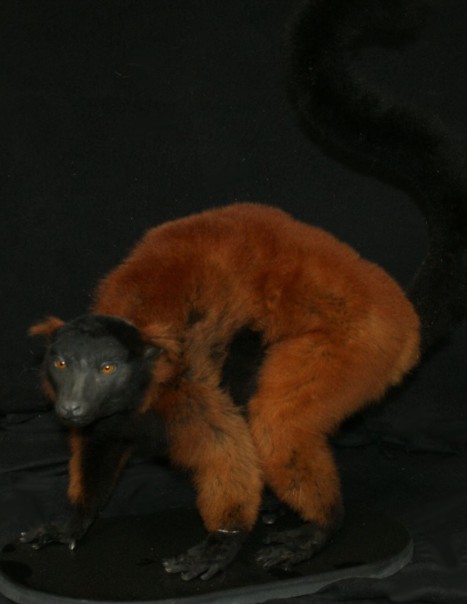 Ruffed lemurs are the largest members of the family Lemuridae.

Those lemurs live in the rainforest along the east coast of Madagascar. They are one of the largest primates of this island.

Those lemurs have slender bodies and long legs. Red ruffed lemurs have a narrow snout with small back ears that are sometimes hidden by their long fur. As its name would suggest, it has a rust-coloured ruff and body. Its head, stomach, tail, feet and the insides of its legs are black. It has a white patch on the back of its neck and may also have white markings on its feet or mouth.

The red ruffed lemur is mainly a fruit-eater, though it is known to eat leaves and shoots. They especially like figs.

Red ruffed lemurs reach sexual maturity at about 2 years of age, and start reproducing at about 3. Unlike all other diurnal primates, females build nests 10 to 20 meters above the forest floor, made with twigs, leaves, vines, and fur. Like all lemurs, it has a fixed breeding season which takes place towards the end of the dry season  from May to July. This is so the young can be born in the wet season when more food is available. Ruffed lemurs are also the only primates with litters of young, and, after agestation period of 102 days, the female may give birth to up to six, although two or three is more typical. Newborns have fur and can see, but as they cannot move, the female leaves them in the nest until they are seven weeks old. Females can nurse up to six infants at the same time. Infant red ruffed lemurs are not as well developed at birth as other lemurs. This is not surprising because red ruffed lemurs have extremely short gestation periods. At birth, infants are not able to hold onto the mother. When she moves the infants she picks them up one by one. Mothers usually move their infants away from the nest after a week or two. When she forages she leaves her infants in a nearby tree. In the few days after she gives birth, if the mother needs to leave the nest, the father will stand guard. Weaning occurs at four months. It is estimated that 65% of young do not reach three months of age, and often die by falling from the trees.