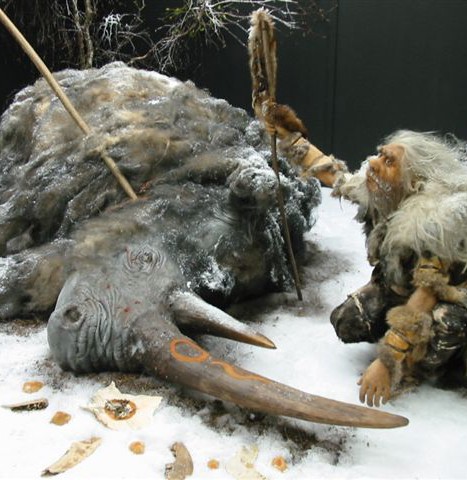 The woolly rhinoceros was a large rhinoceros species characterized by a thick woolly fleece which protected from the cold regions where it lived and by the presence of two horns on its muzzle. It lived in the cold steppes that covered the Pleistocene much of Eurasia.

At its peak, less than 30,000 years ago, it was found from the center of Spain and the South of England to Mongolia and southern Siberia. Its closest relative among current rhino is the Sumatran rhino, small and hairy, which still survives today in Indonesia, but the species is highly endangered.

Unlike that of Sumatra, this species was robust and tall; a little larger than the African white rhino, it measured 1.6 to 2 meters tall at the shoulder and up to 3.5 meters long, and weighs 2 to 3 tons.

Some attribute their disappearance around 8000 BC, the fact that they were hunted by prehistoric man. Others find purely climatic reasons because the occasions when this species was hunted by Neanderthals or representatives of our species were infrequent, given the dangerousness of this animal.