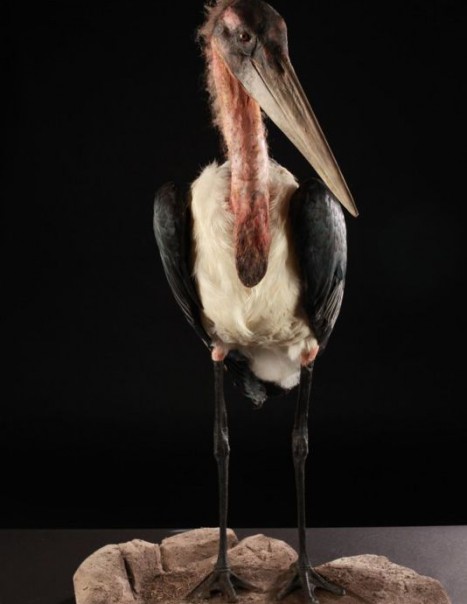 This bird is huge, bald, ugly and with a very impressive beak; these four characteristics are the best to describe the marabout of Africa. Its plumage is slate gray and whitish below, it has very long legs and fly the neck folded like herons.

It is observed in the marshes, lakeshores and African rivers, the marabout is not related to water. It lives and also feeds into the open arid bush and in the wooded savanna, anywhere where the temperature is high enough to produce air thermals on which it glides. The marabou stork is confident, it can be approached and often ventures near villages to feed in landfill. Due to its size and weight, it can glide for a long time, without flapping. There is no adult before three or four years old and only a small part of the population breeds each year. It often nests near feeding sites rich in herds of herbivores.

They build a nest of twigs in a tree or among the rocks. The female lays two or three white eggs at the end of the rainy season so that youngs can be raised during the dry season. They feed on carcasses and fish, near the marshy areas. Both adults take turns incubating the eggs for 30 days and feed them. Young marabout storks fledge two weeks later.
Despite its membership of the waders, the African marabout is in many respects closer to vultures, wich it meets on the carcasses of large mammals such as antelopes and buffaloes which it can easily break through the abdominal wall with its powerful beak. Carrions are its primary food source and at the right height, it glides watching for meal opportunities. It eats different animals that come in range. It often feeds by walking on land or in the water, catching frogs and snakes in shallow marshes or on land.