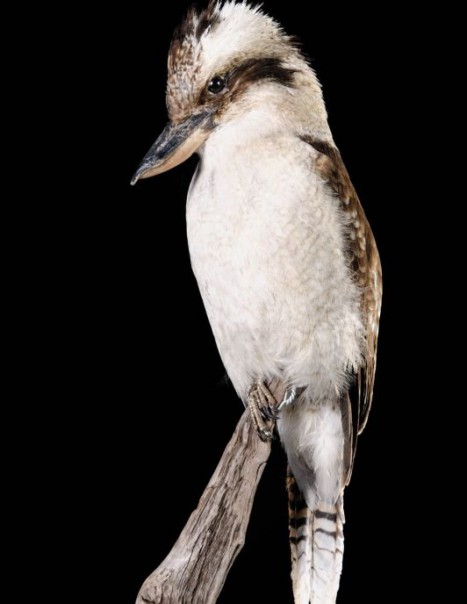 The laughing kookaburra is a bird belonging to the kingfisher family, Halcyonidae.

It is a stocky bird 45 cm long, about 500 grams with a large head, a prominent brown eye and a large sharp beak. The male is easily distinguished from the female by the blue wings and dark blue tail. The female has a little of light blue on the wings but no blue on the tail.

It is found in the eastern part of Australia and it was introduced in Tasmania, Flinders Islands and New Zealand. It lives in all woodlands and does not fear the proximity of man.

It feeds until a prey passes close to rush it. As carnivorous bird, it eats mice and other small mammals like, large insects, lizards, small birds and chicks and especially snakes. It attacks in preference smaller prey than it. But it is not uncommon that surprise attack to animals much bigger than it, especially poisonous snakes. The smaller prey are swallowed alive, larger prey are first killed by strongly hitting the ground.

The mating season is in the early summer of October to November. Couples are faithful and coth onvent and care for the young. The female lays one egg every two days and the brood is usually three eggs. Chick has a hook on the upper beak which will disappear with age but it can be used in spear fighting between chicks if the food is not enough. The weaker chicks can be killed by its brothers and sisters.

This species of kookaburra is well known for its laughing call.