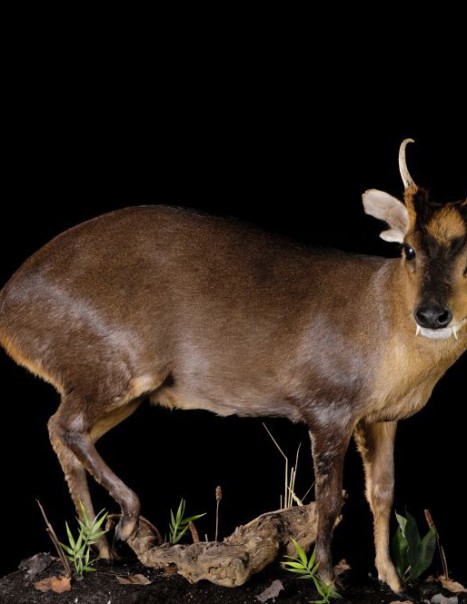 Weighing in average 10 kg, it does not measure more than a meter. It has a reddish color and very dense coat. Males are distinguished from females by their thin defenses on the upper jaw. They are also the only ones to carry wood, like all deer. This is an amazing animal that has the ability to issue different kinds of cries. Indeed, muntjacs are barking deer, meow roar and belling at the same time.

There is also another more known species, called Reeve or muntjac Muntiacus reevesi. The latter is found in the rainforests of Southeast Asia. It is an endemic animal in Taiwan, but it was introduced in East Asia, the Netherlands and the United Kingdom. Unlike the Chinese muntjac, the Reeve’s muntjac is bigger. It can weigh up to 18 kg.

Otherwise, the name muntjac has six other species:

The muntjac is a herbivorous animal that feeds on marsh grasses, bamboo, ferns, beans or soybeans. It likes to live in the high mountains or in wooded areas. They are solitary animals except during the breeding season where it happens to live in small groups of 2 or 3 individuals. They rarely go out the day. They are hunted by wolves, hyenas, eagles or tigers. Therefore, they are protected. Their lifespan is normally 10 to 15 years.

Male and female muntjacs reach sexual maturity at about the sixth month. During periods of rut, males wander to find a sexual partner. Gestation lasts about 210 days. The young are born fully formed and robust.