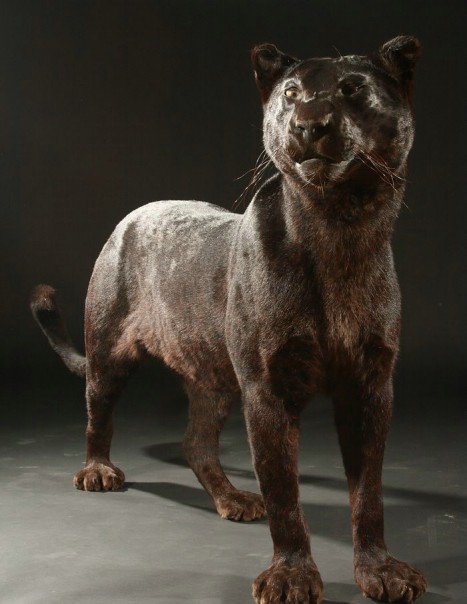 The Black Panther is a carnivorous mammal of Africa, Asia, Philippines and Indonesia.

The Black Panther is not a separate subspecies but melanistic variant. This is actually a leopard with dark fur. It is one of Felines.

The panther is a quadruped. It is very strong and runs fast; it swims very well also and climbs trees where she sleeps and waits for its prey. They mostly eat raw meat. Small, who are unable to eat solid foods, eat meat chewed by their parents to be tenderer.

During the mating season, leopards opposite sex meet; then the male leaves the female leaving the care of the little one. Babies’ panthers remain with their mother until the age of 2 years. Once weaned, and as adults, young people live their solitary way of life on their own territory. The panther has a life expectancy of 20 to 30 years.

Formerly, the leopards were coveted for their very valuable fur, now the panther is a protected species and hunting is prohibited. The panther is the opposite of his cousin the cheetah who tamed easily. She prefers to be alone and does not live in groups.

Today the panther and leopard are considered as single species. We can speak of “Black Panther” or “black leopard”.

The Black Panther dress also wears tasks on the dark background of the fur, they cannot be distinguished. We find this combination of genes in other species of felines as the jaguar and the domestic cat. This pigmentation abnormality is more common among panthers of rainforests of Southeast Asia.

In the same litter, small can be born entirely black spotted alongside their brothers.

Their lifespan is about 12 years in the wild and up to 20 years in captivity. This species is considered the most intelligent of wild cats. They can live in forested areas, large forests, deserts and even in snowy regions. This varies depending on the subspecies. They identify their territory with urine and deep claw marks on trees.

It is a nocturnal hunter, at dawn or dusk, both hunting techniques are the lookout and hidden approach. Once it has killed its prey, it will take him on a tree leopard can hoist 120 kg and hang up to 200 kg. It prefers herbivores: wildebeest, antelopes, zebras, buffalo, monkeys, but can meet reptiles, lizards, young crocodiles and small rodents, and even fishing.