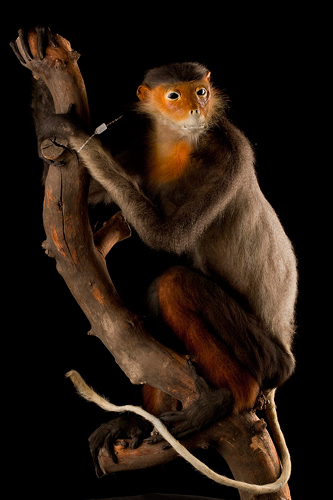 The red-shanked douc is a species of Old World monkey, among the most colourful of all primates. This monkey is sometimes called the “costumed ape” for its extravagant appearance.

Like other doucs, the red-shanked douc is a long, slender monkey. The male has an average head and body length of 61 cm and the female averages 54 cm long, with a tail that measures 55 to 76 cm long. Males weigh on average 11 kg and females 8.5 kg. There is a slight difference in rump markings between genders: the male has round white spots above the triangle of white on its rump, while the female does not.

All doucs are native to Southeast Asia, specifically Cambodia, China, Laos and Vietnam.

Doucs are, like all monkeys, social animals. They live in groups with an average size of 4 to 15, but groups of up to 50 have been recorded. A group usually consists of one or more males and approximately two females per male

Like all other Old World monkeys, its tail is not prehensile. It uses its tail solely for balance, and it uses its arms and legs to move through the forest along established routes.

Mating takes place from August to December. The pregnancy lasts between 165 and 190 days, resulting in the birth of a single offspring just before fruiting season of some favorite foods. Twins are very rare. The young are born with their eyes wide open and they cling to their mothers instinctively. The baby’s body colouration is lighter than an adult’s. Females reach sexual maturity at about 4 years, while the males reach it at 4 to 5 years. They have a lifespan of about 25 years.

The main predator of the red-shanked douc is humans. It is threatened throughout its limited range by habitat destruction and hunting.

The red-shanked douc is diurnal and eats and sleeps in the trees of the forest. Its diet consists mostly of leaves high in fibers.