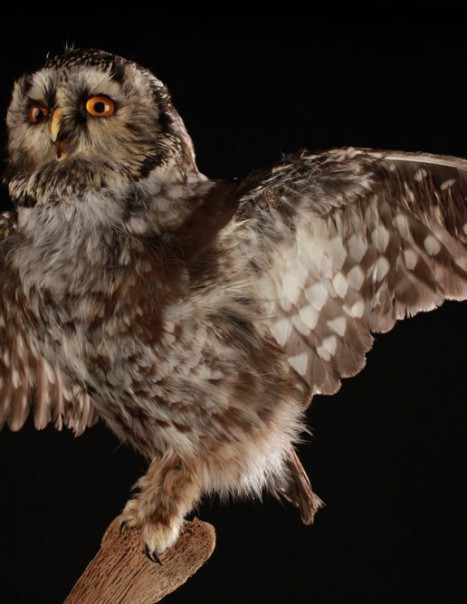 The boreal owl is a species of small nocturnal bird of prey of the Strigidae family. Difficult to observe, it is protected at European level.

This small owl has a similar appearance to the Little Owl by its stocky figure, except that the head of the owl is larger because its front is less low. This bird is 25 cm, scale is 52 cm for a weight of 135 g.

Boreal Owl is distinguished by its color ivory-billed (whereas the owl is greenish yellow) the expression of his face is deemed severe, it is only visible when the bird is alert with two widely deployed facial discs.

It lives in coniferous forests, plains and mountains, including mixed forest areas. It nests in holes of trees in Europe, south-west to the Pyrenees and south-east to Greece. Also on the North American continent to the southern United States, New Mexico, Asia, southern Kazakhstan, north of North Korea and Taiga.

Its singing period begins in April and does not go further than one kilometer.  Until it has not found a partner, the male sings continuously throughout the night for several days or even weeks. This is when it is easiest to see it.

Its diet consists mainly of small mammals, small voles, mice, shrews, small birds. Its hunting technique is simple: it positions on the lookout perches in the forest and enjoy the surprise effect to capture its prey.

Boreal Owl dexterous is protected by the European Commission, the reasons for this decision is due to the deterioration of the habitat of the owl, forestry, deforestation, disturbance of nesting sites because of tourism development (winter sports). It is forbidden to destroy, capture or removal.