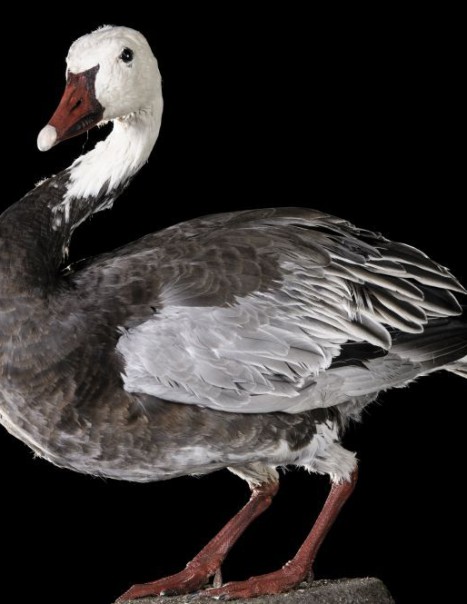 The Snow Goose is also known as the blue goose.

The snow goose has two color of plumage; white (snow goose) or gray/blue (blue goose), thus the common description as “snows” and “blues.”

White-morph birds are white except for black wing tips, but blue-morph geese have bluish-grey plumage replacing the white except on the head, neck and tail tip. The immature blue phase is drab or slate-gray with little to no white on the head, neck or belly. Both snow and blue phases have rose-red feet and legs, and pink beak with black tomia (“cutting edges”), giving them a black “grin patch”. The colors are not as bright on the feet, legs, and beak of immature birds. The head can be stained rusty-brown from minerals in the soil where they feed. They are very vocal and can often be heard from more than 1 km away.

This species can live up to 25 years away from predators.

During the summer season, goose can be encountered in the tundra’s snow. It especially likes wetlands, such as marshes. It winters in coastal areas, mainly in Asia and North America.

Its diet consists mainly of plants, including arctic willow shoots or roots of aquatic plants, and even corn seeds.

Snow geese do not nest in colonies necessarily, but can also live and be alone. Couples usually make their nest just before the beginning of June, with down and dry grass. The female can lay up to five eggs. About 48 hours after hatching, the chicks leave the nest and begin a phase of intensive feeding for several weeks. They become truly autonomous and independent to one year and enter the reproductive phase only 3 or 4 years.

Snow geese know some predators. Their descendants are particularly prey of polar foxes, gyrfalcon, etc. However, their population is not particularly threatened and it is even easier today to meet freely in their natural environment.