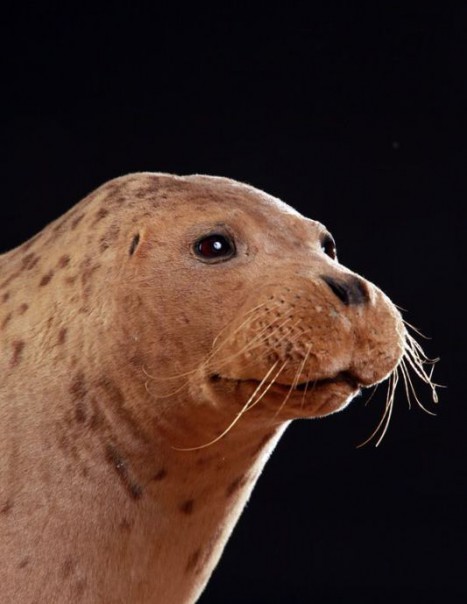 It is found in the Pacific Ocean, in Japan, California, in the Bering Sea, the White Sea and the Gulf of Kandalaksha.

It is the largest of all sea lion species. It is distinguished by its small head and short muzzle with its hind flippers.

Males are much larger than females and are characterized by their dark black or dark brown coat and long whiskers, while the coat of females is light gray or light brown.

They feed on fish, herring and squid and they hunt alone in the cold waters. Daily consumption of a sea lion represents about 10% of its weight. Every May, sea lions congregate in large numbers in some rookeries. The females reproduce at the age of 3, but the males are sexually mature at the age of 4 or 5, but do not mate before 9 years.

Males, polygamous, have indeed establish their territory and defend it dozens of times against other contenders, which often leads to bloody duels, some fatal. Thus, the “owner” of the territory may not be absent for food for several months and lives on its reserves: when returns to the water, it sometimes lost nearly a third of its weight. Females arrive full and choose a location defined by the male harems where they are ten to twenty females for most. The birth of a single pup comes shortly after the arrival of a female. The latter is fertilized after five to six days.

Females have a double uterus allowing a gestation period of nearly a year, much higher than other mammals, approximately 9 months. The youngs are weaned in October. At the end of November they migrate south with their peers.