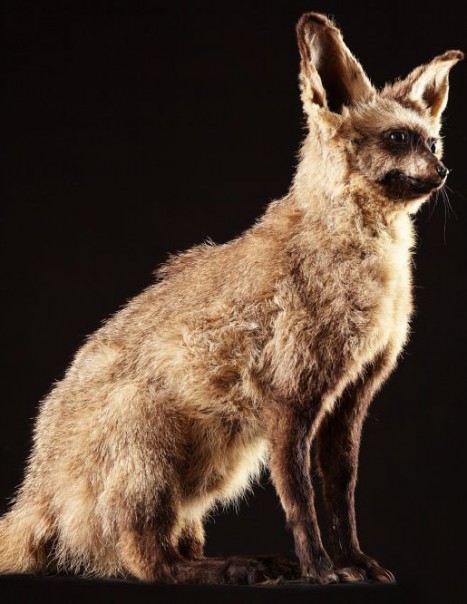 This carnivore belonging to the Canidae family living on the African continent.

The bat-eared fox is also octocyon and called fox bat ears because of his ears, which measure between 11 and 13 cm each. This little animal with long ears is considered the African cousin of the fox and the wolf.

Its fur is gray ash color on the dorsal and pale face on the side with a black tip at each end of its body. It has a very bushy tail and large ears. Digitigrad, the fingers of his paws serve as its ground support surface. It measures between 35 and 40 cm and weighs about 5 kg. It has a very acute hearing, with which it identifies its prey which are: insects, grasshoppers, termites, beetles, rodents, gerbils, rats, lizards and birds’ eggs.

It lives mainly in Morocco or in the Serengeti National Park in South Africa. It is found mainly in arid grasslands and savannas. These courses make it very easy to quickly dig a shelter in case of danger or for breeding.

He drinks very little, morning dew and the liquid contained prey are quite sufficient for subsistence.

They are monogamous, but it is not uncommon to find burrows with 2 breeding females. Breeding usually starts in April or June. Pregnancy is very long for a fox, which is of the order of 60-75 days. For a scope which averages have 4 youngs, borned blind in the shadow of the burrow. They open their eyes at the end of 9 days. The weaning will occur only after 14 to 15 weeks.

The bat-eared fox has a much a diurnal as nocturnal behavior, we know that each of them usually home to a family. However, they come to them to cohabit with another family in the same burrow.

The bat-eared fox is often the prey of raptors such as eagles or mammals such as jackal or cheetah.

Frequently captive, there is, however, a distinct lack of information on trends and population abundance of this canid in its range.

A bat-eared fox has a life expectancy of about 15 years.