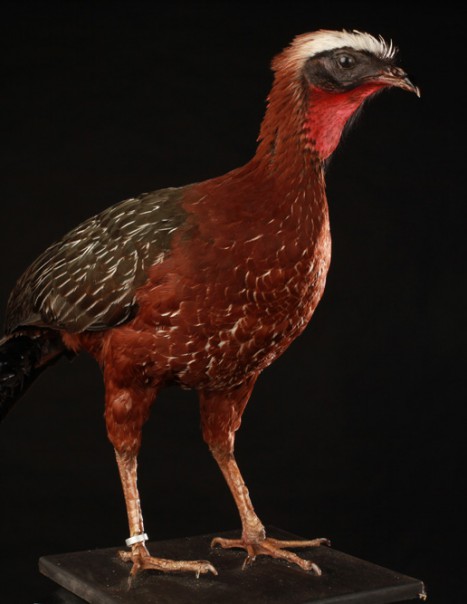 The white-crested guan is one of the most colorful Penelope species, it has a marked contrast between the dark color of the upper parts and the relatively clear of the lower part.

For a forest bird, the crest is relatively developed. The face is dark slate gray with scattered black feathers and a transverse black area on the top of the forehead which mark out the white cap and the dark color of the face. Wrinkles and flabby flesh under the chin are red. For the male, the irises are dark red and for the female it is a little clearer. The legs and feet are red coral and the claws are black. At birth, the chicks have a clear black stripe edged with grayish yellow stripes around the cap.

At birth, the chicks are fed by both parents. From the age of 50 days, the youngs are already taking the appearance of parents with early adult feathers appearing everywhere except on the head and neck.

They live in tropical moist lowland forests where vegetation is dense and where they go unnoticed They are native to South America, Brazil, south of the Amazon, between the Lower Rio Madeira to the lower reaches of the Rio Tapajos.