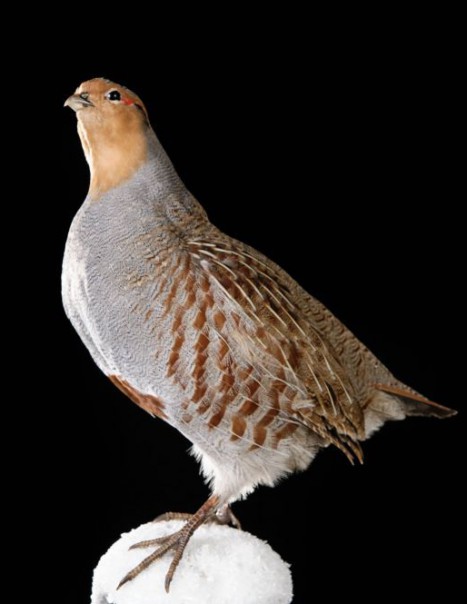 From the North, the Grey Partridge is ​​a species of bird gallinacean.

The grey partridge has a rounded silhouette. Its breeding plumage gives to its forehead, face and throat with a very bright orange-brown. In the male, a horseshoe-shaped rust stain on the bottom of the chest. The female also has a rust stain but much less extensive.

The Grey Partridge like its cousin the red partridge, tends to run and hide rather than fly.

It is located in the lowlands, grain fields, vacant lots and hedges. It does not like too wooded areas, too wet or too grassland. The most favorable habitat are bushes, sometimes mountainous areas, and it goes down when winter comes.

It feeds at dawn and dusk. Until the age of 3-4 weeks, partridge consume invertebrates, aphids, ants, beetles, caterpillars, spiders. The proportion of seeds, plant fragments and invertebrates varies seasonally. In autumn, the gray partridge accumulate reserves for the winter.

In summer, feeding periods correspond to hours after dawn and before sunset. They nest from May to places where vegetation reaches a sufficient cover. Brooding begins when the last egg is laid and lasts 23 to 25 ​​days. During this period, the roosters ensure the nests. The egg hatch begins in mid-June and the chicks leave the nest after a few hours with parents and form a family group called company. Weather conditions strongly influence the reproduction. Precipitation can actually drown the punters, high temperatures can compromise the eggs hatch, the cold, wind and rain may significantly increase mortality in chicks.