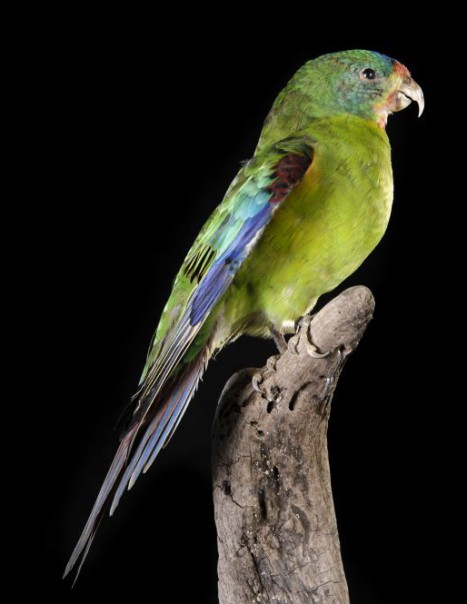 The mulga parrot is also known as the many-colored parrot. It is endemic from Southern Australia.

In the adult male, plumage has bright green overall appearance. A yellow band crosses the front and a red variable patch on the back of the cap. The abdomen and thighs are yellow, more or less stained with red. Rump and upper tail are green, with a red stain at the base of the tail, a yellow transverse band at the rump and dark bluish green line at the lower back.
The female head, back and upper chest are brownish olive. The juveniles are much duller than their parents.

The colorful parakeets prefer the arid plains and wooded habitats where it can find a wide variety of vegetation. They are also found in the bushes, acacias, eucalyptus, in the rocky hills or rocky escarpments. They survive in dry areas near the temporary streams.

It is widespread throughout Australia, it is a quiet and secretive bird. It usually lives in pairs or in small family groups, often in large flocks. Most of the time, it seeks its food on land, the shade of trees on the edge of a small road. When it comes to drink, it is very prudent and when it rests in the tree canopy, it remains well hidden. Multicolored parakeet has a firm theft and property insured. It operates at a low height above the ground.

The nesting period takes place between July and December, but also at other times of the year. The nest is often located in a natural tree cavity, it often nests in small stunted trees where the nest entrance is located at low height above the ground near rivers. The female incubates for 19 days and the male stands guard, it nourrishes and warned of a potential danger.

The species is widespread and relatively common.