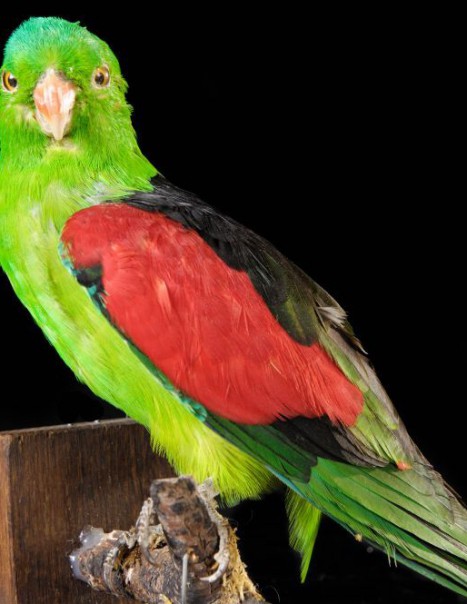 Royal parakeet – also known as Australian King Parrot – is a species of parrot endemic to Australia.

This bird has three pen colors: green for the upper body, red and blue for the lower part for the rump. This 43 cm parakeet is characterized by its gray legs and yellow iris. When they reached maturity, it is easy to distinguish the male from the female by the color of their beak. The male’s one is of orange color whereas the female’s one is black. Before this period, the general appearance of both sex is similar: brown beak and iris.

Royal parakeet is found mainly in the east of Australia, including northern Queensland and southern Victoria.
This bird tends to disappear in some places due to the replacement of eucalyptus by other trees such as Monterey Pines. Fortunately, the Royal parakeet is well suited for farming, which contributes to its preservation in spite of the destruction of their natural habitat.
This bird is able to reproduce from 3 years years. Laying begins between May and June. During this period, the Royal parakeet that is naturally placid, is aggressive toward individuals of other species. Females lay up at most five eggs with a two-day interval. Brooding takes about twenty days. Five weeks after their birth, the chicks fledge. They are not totally independent because their parents still continue to feed them for a period of three to four weeks.

Like all Psittacidae, the food of Royal parakeet consists of seeds such as corn. They also feed on fruits, berries. In breeding, it is also possible to add to their diet of cooked beans and mash with powdered eggs.