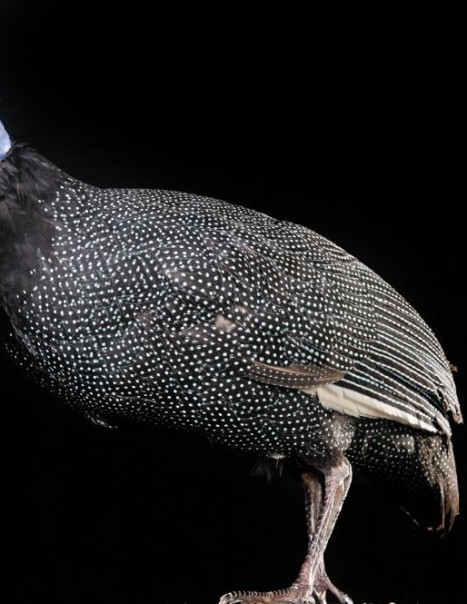 The crested guineafowl is a member of the Numididae, the guineafowl bird family.The species is not very common in captivity, but is found in some regions of Asia, the US and Europe. This subspecies is the most common.

It is found in open forest, woodland and forest-savanna mosaics in sub-Saharan Africa.

Crested guineafowl can be recognized from its crest adorning all over its head, from which it takes its name. The rest of its head being completely naked. The outline of its eye is red while the other folds of skin adorning its face and neck are bluish gray. Its plumage is uniformly black studded with numerous white spots.

This is a reserved bird, which does not make noise in comparison with other species of fowl. Its diet consists of insects, seeds, seedlings and even fruit. Its activity is primarily diurnal. In search of food it strolls with its head down in order to find the fruits that would be on its way and have fallen from the trees.

Although equipped with wings, it rarely uses except in an emergency or to achieve its perch. It prefers to move by walking or running.

The breeding season runs from April to June as well as December. The female lays three to four eggs.