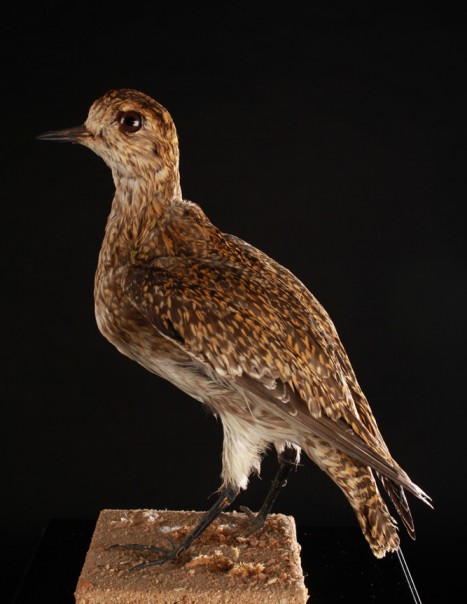 This species is similar to two other golden plovers :

The typical plover is medium in size. It has a stocky body, a rounded head and short neck, a small beak and long legs. Often to the ground, the golden plover fond of dishes and open areas in the open herbaceous vegetation and without tree, where it can run quickly in case of danger. During the breeding season, the typical habitat of golden plover are clear-moor, tundra and peat lands. In winter, it frequents cultivated plains, meadows, grain fields, plowed fields and polders.

A minority is migratory, before the fall migration, golden plovers moult and take their winter plumage. Golden plovers form groups of 50 to 5,000 individuals. In the spring, the groups are usually smaller, some migrate alone, others in pairs.

Before the start of breeding, it moults and takes breeding plumage, more colorful. Couples usually form just before the arrival on the breeding grounds and mate for life. Once selected the breeding site, the male defends its territory vigorously against the intrusion of rival males. The male then digs several small pits in the ground.

The nest is then enlarged by the female, then garnished with herbs. Approximately 3 weeks later, the female lays 3 or 4 eggs in the course of 2 days. Incubation is carried out by two adults, with different degrees of participation. Sometimes the male incubates during the day and the female at night. They can also take turns at regular intervals. The eggs hatch between 28 and 31 days and the chicks are precocial, it means well developed at birth. The young are fully feathered after a month and can reproduce the following year.

They eat insects, beetle larvae, slugs herbs and they rest in winter.

Its lifetime is estimated at 12 years.

The Golden Plover is mainly threatened because of the loss and alteration of habitat.