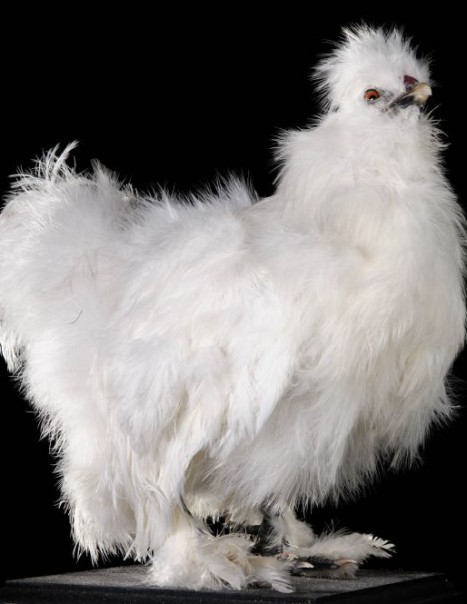 The Silk is an Asian chicken. It is a domestic breed called also goose-silk because of its abundant and silky plumage resembling a fur and because of the dark color of his skin and hair. This unique animal is a class of birds Galliformes order and phasianidae families.

It is a short and wide body poultry measuring between 25-35 cm with well-rounded contours. Its wide peak is dark blackish blue color is traversed by a transverse furrow. It has a short beak and sharp bluish color. These ears are smaller with an oval shape and his eyes are darker in color. The silkie has small rounded wattles and a fine texture. Its neck is very short with hackles covering the entire part of his shoulders. The wings thereof are wider and shorter, they are slightly bonded to the body. Black-silkie is mainly characterized by its plumage which is soft from the fact of being silky and abundant. Its feather is a fluffiness accompanied by shaft and very soft beards. The existence of a fifth finger and a regular hoopoe also differs from other poultry.

Silkie is an animal belonging to the omnivores category, they eat a little of everything. It seems that its fifth finger is used to capture the stems. To repel insects or worms, poultry uses scraping the ground. Nowadays, almost all domesticated poultry are feed by humans. A silkie can live up to 10 to 12 years if it is nourished healthily, if not it lives between 2-6 years only.

A silkie begins to lay eggs around the age of 7 months and starts to smolder after two to three months. It can lay a dozen eggs at a time and that is at the end of the 10th day of incubation the chicks begin to use the shell.

The silkie is an animal that takes great care of his feathers. It is also known to be particularly curious and very attentive. It is very protective and takes good care of its young.