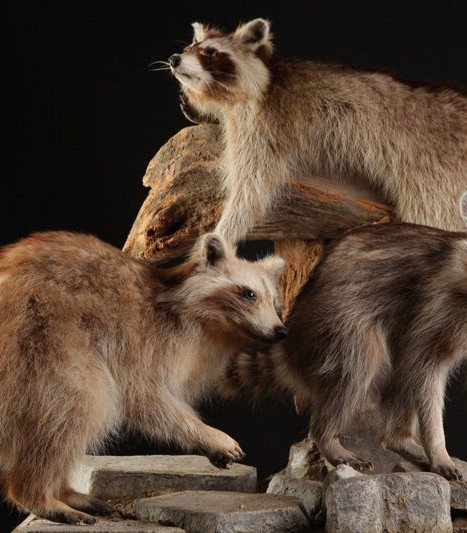 Raccoons are native to North America. It was introduced in Europe and Japan. It lives in the forests along the rivers and swamps, it also appreciates the suburbs and cornfields.

This small mammal measures 60 cm, its long tail is half the length. Males are larger than females, it weighs up to 9 kg.

It has a very thick gray and black fur. Its head is white with black patches around the eyes. Its muzzle is rather sharp and it has small ears. Its tail has black rings and always ends with a black tip. It has long claws and canines.

Raccoons are omnivores, they eat everything, however fond of fruits and nuts. It also likes insects and larvae, fish, mollusks and small mammals such as mice.

In town, it explores the garbage. In the fields, it delights the ears of corn. Its name comes from the fact that it would wash its food before eating it. It rubs what it eats or hunts as aquatic animals (already own).

The male and female mate early in the year. Gestation lasts 2 months. It gives birth to 2 or 3 young in general, but it may be more. At birth, the cubs are blind and weighs only 70 g. The mother takes care of her offspring alone. They are weaned after 4 months of breast milk and end up eating on their own. Sexual maturity is reached at one or two years old.

This species poses many problems. It was classified as a pest. It can have a strong impact on the surrounding wildlife and destroyed maize crops. If observed its damage in a region, raccoon could be eradicated. In France, it is considered harmful. Everywhere it is driven either because of its damage or for its fur. A lot of people killed each year.