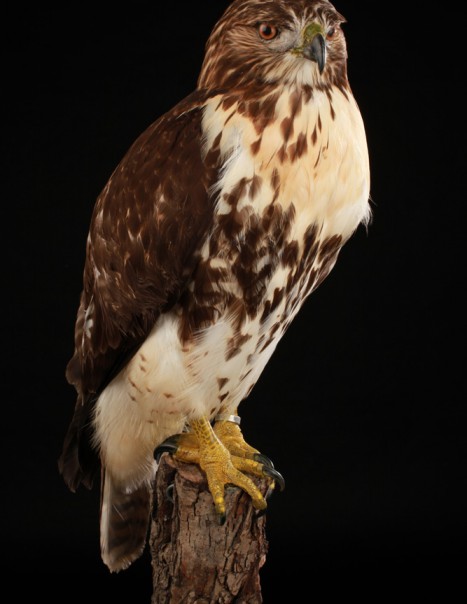 The most common and best known of the North American nozzles is the Red-tailed Hawk, it is also one of the largest birds of prey in Quebec after the Vulture and the Eagles. The scope and length of 1.35 m to 66 cm long. This diurnal raptor is often observed over the fields where he casts rotating. His great wings and wide tail allow it to stand still against the wind to observe small mammals, its favorite prey. Also seen in the forest glade where it perches before going there to hunt. This nozzle has several colors and both sexes are similar.

It breeds across North America, from Alaska to Mexico. In winter, it migrates to Panama and the Caribbean. In Quebec, it is present in the James Bay to the US border. The nest is in a conifer or deciduous, usually on top of a big tree near a clearing. It makes a platform branches lined with bark and dry vegetation. The female lays 2-4 eggs there, will hatch more than a month and youth will be fed by the couple for 6-7 weeks before the flight.

During the months of reproduction, May, June and July, we can see that nozzle pitched highlight on the edge of a forest, waiting for a prey, mouse, shrew, vole, rabbit, bird, reptile, amphibian or even a cricket or a grasshopper. Parents defend their nest aggressively enough. They fly over the site by making large circles and shouting incessantly.

The observer can find the nest, quite large without too much difficulty. The observed number of nozzles, for 50 years, both the United States and Quebec is growing.